Back in the days, many RPGs offered you only one way to go as you've progressed. The developers quickly realized that it's not player-friendly, and it's getting boring and dull quickly. It is why in most RPGs, you are offered more than class, job, profession, spec, or whatever it's called. It is exactly the case for MapleStory 2, as well. Depending on a server, we have 10 or 11 classes to choose from. These are Archer, Assassin, Berserker, Heavy Gunner, Knight, Priest, Runeblade, Soul Binder, Thief, and Wizard. And we have prepared an ultimate guide for all of them with more in-depth articles about each of them.

Today we are about to focus on the MapleStory2 Heavy Gunner build and guide you through the gameplay.

It is an incredibly gifted engineer from Edelstein who fights forces of darkness with the aid of self-designed weaponry such as cannons. Dealing fire and lightning damage from a distance, he is a pillar of every team strategy. Thanks to his excellent combos dishing out high amounts of damage, he stands out as a major offensive force in boss battles, raids, and dungeon exploring.

- Has skills for regenerating both HP (Med Kit) and SP (Reload)

- SP skills are based on AoE (Area of Effect) Damage

- Has skills that enable you to perform high total damage in Boss Raid events, when utilized in the correct order

- His skills/stats make him a massive mob killing machine.

- Many SP based skills have a cooldown timer

Now we will examine Heavy Gunner's skills on which we are going to plant our build. At the very beginning, you will have an opportunity to level up such skills as Bullet Spray, Gatling Fire, Jet Boots, and Reload. Thanks to them, you will be able to modify Heavy Gunner to your gameplay likings and desires.

The percentages in the brackets are the upgrade range of the skill, usually from rank 1 to 10.

Active and Passive besides skill names designate whether they have to be activated manually in case of active skills or are always in effect in the case of passive skills.

Level in captions informs at which level skill first becomes available to use.

Bullet Spray (active) - Fire 4 times in a row as the cannon's barrel spins, at the same time dealing (39% - 66%) damage to the closest enemy within 8 m in front of you. Bullets can't pierce through multiple enemies. Additional pressing of the skill key triggers a two-hit combo. On the second hit, the skill lasts until you let go of the skill key.

Gatling Fire (active) - Fire wildly three times, till the cannon's barrel stops spinning, dealing (44% - 80 %) damage up to 5 enemies within 8 m range in front of you. This time, using special piercing bullets that allow you to damage all targets. Pressing the skill key triggers a three-hit combo. Skill alternates between the second and third hits while the key is pressed. It consumes 5 spirit.

Jet boots (active) - You can propel 6 m forward by using your jet boots, additionally leaving behind a shockwave that deals 120% damage up to 5 enemies within 1,5 m. It consumes 60 stamina.

Lock–On (active) (Level 19) - Heavy Gunner takes a shooting stance, aiming at the closest enemy within 8 m range in front of him and shoots a special bullet that deals (446% - 725%) damage, piercing him up to 8 times, additionally damaging enemies standing behind. It consumes 15 spirit.

For PvP, you may want to skip the "Boss Damage" for something else.

Boss damage - One of the most important stats, since it increases your damage unleashed on bosses. Crucial in every PvE scenario falls off in PvP. Remember to adjust your gear depending on the mode you are aiming into.

Critical rate - Increases the probability that the attack will land as a critical hit. Critical hits deal additional damage. The critical rate cannot increase above 40%. [Critical Rate - Critical Evasion = Effective Critical Rate on an enemy or player up to a maximum of 40% under normal circumstances] 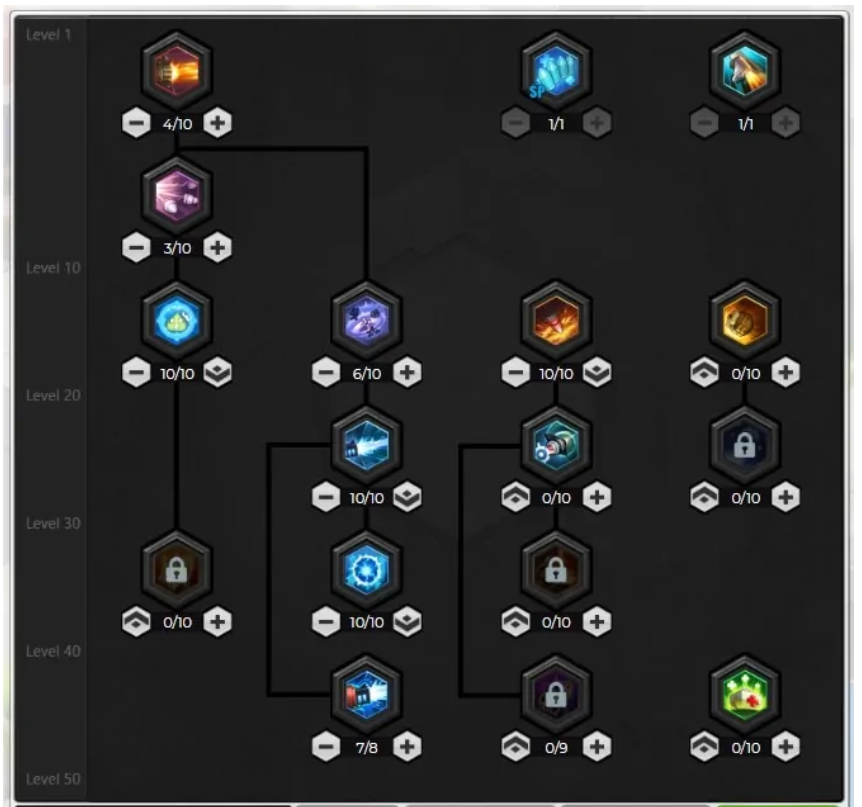 Suitable for beginners, designed for level 50 – 60 Heavy Gunner who is looking for gathering end – game content, ways of dealing with world bosses, and exploring dungeons.

This MS2 Heavy Gunner Build is based on the Electric Blast. It's a solid build that allows you to perform well in boss fights because of the vast amounts of damage it can deal. By upgrading the Advanced Pulse Weapons node to 10, you'll have a lot of increased damage on Electric Blast coming in pair with Blast Charge Kit. Remember that Rocket Launcher is not needed but does boost your DPS quite a lot. Level 8 Rocket Launcher should be sufficient for any content if your build is Skill Point hungry.

Use Lock-On and after that hit Electric Blast 3 times (you can also pile them up, use 2 before a boss fight and then use the 3rd stack for more damage). Use Rocket Launcher as well if enough SP is available, If you run out of SP, make sure to use Reload, it's an excellent skill that quickly restocks your SP. 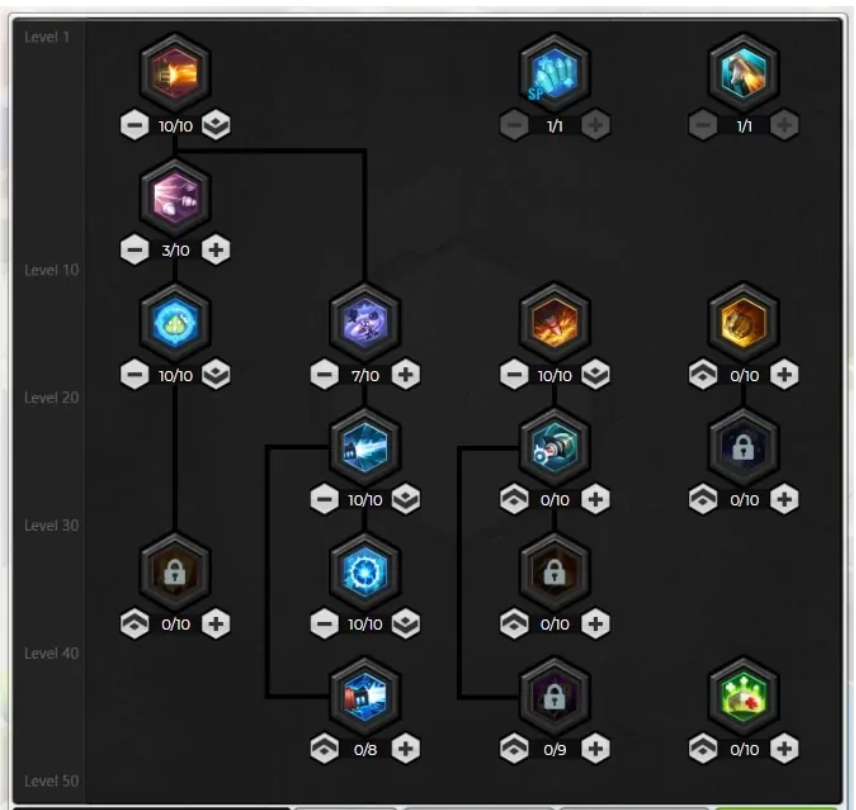 Based on great skill – Bullet Spray allows you to deal massive amounts of damage at any level, and with other high damage skills, it makes a killer combination.

This MapleStory2 Heavy Gunner build focuses on Bullet Spray skill. It is designed to deal with both AoE and single target. The only limitation are Skill Points, so you can forget about leveling with this one.

You start with Lock-On (hit it once), then shoot with Rocket Launcher (once) after that comes Magnetic Bomb (once), then it's time for Electric Blast (charge it to the max) and finish this combo with Bullet Spray (hold down the Skill key). Use Bullet Spray only when other skills are on cooldown. Whenever they come off it, make sure to cycle through them again. Don't forget that you can also charge the Electric Blast for additional damage.

Bullet Spray in this build can be used by itself, or you can spam it on its own, but if you want to do the highest damage possible, then go through skills in mentioned above order. 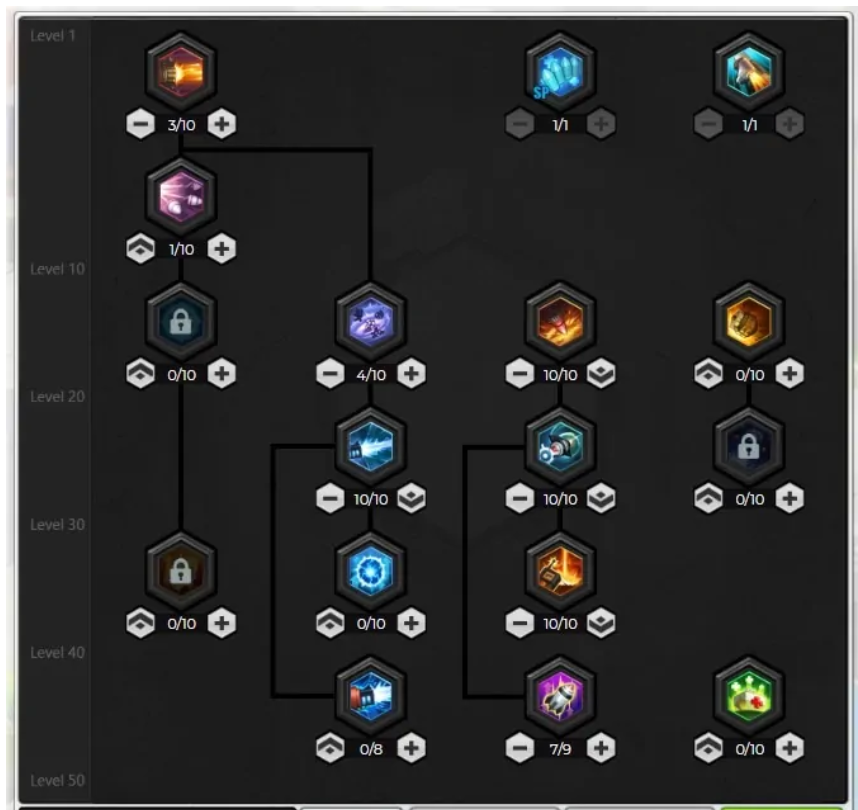 This build is for those players who want to grind fast through MapleStory2. It uses a variety of Rockets and Missiles, M – Bomb, and Electric Blast in order to deal a lot of AoE type of damage to speed run the content. It best suited to use while leveling to 50 – 60.

This build is to based on your single Macro. Put Rocket Launcher, Homing Missiles, M-Bomb, and Electric Blast on a key Macro and hold a designated button while these skills decimate everything in your way. Encountering Bosses with this is not the best solution because most of the boss fights require from you dodging attacks and using mobility based skills, but for leveling only, this build is excellent.

It is all we have prepared for the MapleStory 2 Heavy Gunner guide. We hope it's enough for you to reign supreme in fun to play, candy-like looking MMORPG. Heavy Gunner stands in opposition to the general outlook of the game. At the first glance, it looks like a fairytale, and then the HG comes in to bullet spray enemies straight to their graves. The class, as befits any other DPS class, is really enjoyable and exciting. It has its ups and downs, and currently, it's slightly behind the Wizard in terms of pure DPS, but nothing lasts. One good buff or nerfs can put the Heavy Gunner in the top spot of the MapleStory 2 class tier list.

Make sure to check our other guides, especially the ultimate MapleStory 2 Class guide, which will help you to choose the best class for you. It will allow you to avoid the uncertainty regarding and hard question of: "Which class should I choose in MS2?" Thanks to us, you can make your decision before entering the game!

Leave your feedback on either our Facebook page, Twitter, or directly here. If you ever find yourself in need to buy MS2 Mesos, or other MMORPG currency, look around, and search for the commodity of your needs. If we don't have it, or our stock is not enough for you, feel free to poke us at the Live Chat support to make a request. Have fun!