Like in any other MMORPG, MapleStory 2 offers a wide selection of character classes. You can choose one of 10 characters – Priest, Knight, Heavy Gunner, Soul Binder, Berserker, Wizard, Thief, Assassin. Runeblader, and Archer You can find guides for all of these characters on this website.

For players, who prefer mid-range combat rather than a direct approach, the MapleStory 2 Archer is a perfect choice. We hope this article will make Archer more accessible to you, therefore making the whole game the most enjoyable experience.

Using bow as his weapon and utilizing skills such as Arrow Barrage and Arrow Stream, the Archer can quite easily deal much physical, fire, or ice damage up to 5 enemies. He is a valuable addition to every party, thanks to his AoE and crowd control abilities. More importantly, he will improve the team's critical rate and overall accuracy. So if you are new to MapleStory 2 world, we strongly suggest considering the Archer as your first choice of character class.

- Can achieve high combo count thanks to his skills

- Excellent as a DPS

Let's take a close look at skills, which will serve as the base for our build. Starting from the beginning, you will be allowed to level up Arrow Stream with Snipe, Eagle Glide, and Arrow Barrage. These free skills will become the core of your build.

- The percentages in the brackets are the upgrade range of the skill, usually from rank 1 to 10

- Level in captions tells, at which level skill first becomes available to use.

Arrow Barrage (active) - It allows you to fire several arrows at once, dealing (153% - 252%) damage to 8 enemies standing in 7m range from your character. Pressing key in succession triggers 3-hit combo, meaning that it can deal additional damage (82% - 127%) with the third strike, while your character performs a reverse somersault. This skill consumes 12 spirit.

Evasive Salvo (active) (Level 10) - It deals damage (108% - 171%) up to 5 enemies in the form of 3 waves of arrows. Each wave is fired 2 m apart and has a 40% chance to strike critical hit despite Archer's Crit stat. It cancels other skills and makes you vulnerable to knockback. Using it costs 40 stamina.

Rapid Shot (active) (Level 16) - Archer will shoot three series of fire arrows, dealing damage (42% - 69%) to the closest target in the range up to 9 m from him. They pierce the enemy three times and can deal damage to enemies standing behind him. The skill is active while you hold down the skill key. It takes 7 spirit.

Ice Arrow (active) (Level 22) - As the name suggests, the Archer will fire multiple ice arrows at once, dealing (58% - 94%) damage to enemies up to 9 m in front of him. While hitting, their movement speed and jump power decrease (4%) for 5 seconds. The speed reduction effect can be stacked up to 10 times. Ice arrows pierce enemy four times, and can also hit targets behind him. It consumes 6 spirit.

Arrow Storm (active) (Level 25) - Your character will fire a spreadable arrow up into the sky, which later rains down on up to 8 enemies standing within 4,5 m dealing damage (39% - 66%) 20 times. Hold the skill key down for half a second to fire at a distance of 7,5 m. It makes you immune to knockback.

Eagle Claw (active) (Level 28) - It deals damage to up to 8 enemies in 9 m range. He also scratches them dealing additional damage (302% - 491%) for 6 sec, reducing their movement speed and jump power by 1/3. This skill is available only when Bronze Eagle is nearby, and he disappears after this skill is used.

Snipe (passive) – While aiming your next shot, 5 spirit is restored every 0,5 sec. When enemies are outside 4 m range, the number of restored spirit increases by 3.

Bronze Eagle (active) – summons an eagle, who will allow you to fly 7,5 m forward. It's worth to know that you can cancel other skills with it — costs 80 stamina.

Bronze Eagle (passive) (Level 13) - Summon your bird companion by landing a critical hit. He will fly by your side for 15 seconds, increasing your dexterity (4.4% - 7.1%). After that, you must wait 18 seconds to summon him again.

Sharp Eyes (active) (Level 34) - It creates a magic seal that covers the nearest five tiles around your character, which affects all your allies within its range. Critical rate (13 – 76) and accuracy (1 – 5) increase for every team member. The seal lasts for 20 seconds. It also increases your critical rate (4 10).

Accuracy – Increases your chance to land a successful hit.

Boss damage - One of the most important stats, since it increases your damage unleashed on bosses.

Dexterity - Increases the strength and accuracy of Archer's physical attacks and also affects his resistance for such. The higher it is, the more damage we deal to hostile mobs and other players.

Physical piercing damage - This stat works with your weapons. Second, in line, are your gloves.

We've prepared a couple of exemplary, recommended builds for Archer in MapleStory 2 so that you do not waste your precious time.

If you prefer PVP gameplay, you should invest heavily in your shooting skills. Your second concern should be skills tied to damage dealt by arrows. By doing so, you'll become a master shooter in no time. Your speed will be your advantage in comparison to the heavy gunner. So here's the point - Archer's mobility makes him a strong candidate for distance PvP combat.

For PvE, you should go for more team-supporting, buffing build, while still utilizing the Bronze Eagle. Thus, you can't go wrong with adding more crit (to proc the Eagle) and attack speed (to have a higher chance for crit). There are two main builds for the Archer in MapleStory 2. 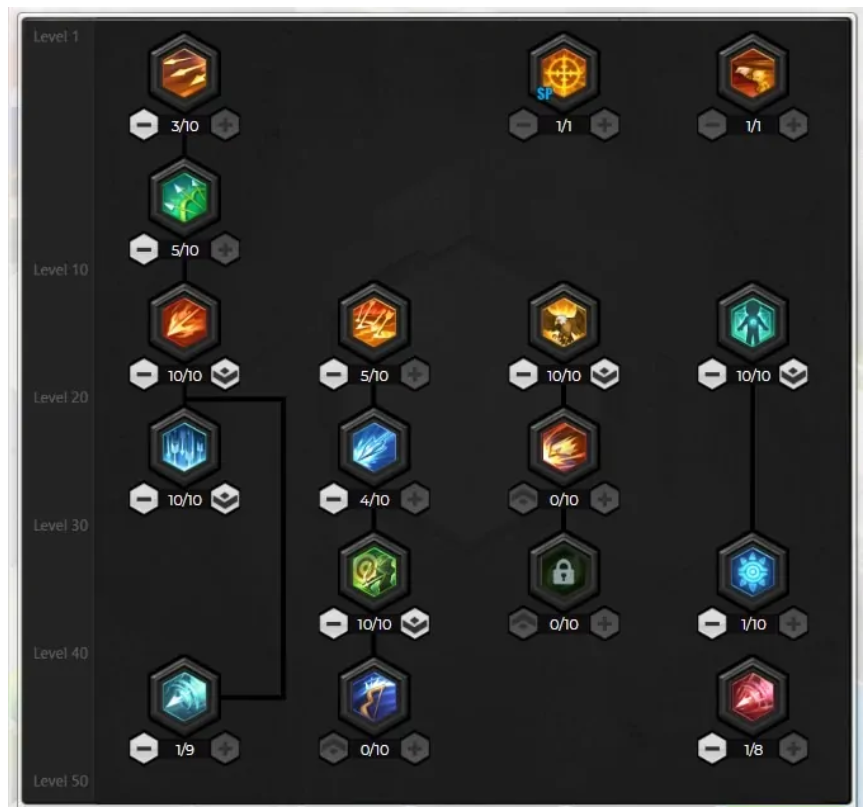 We'd risk a statement, that it is by far the most popular, widely appreciated, all-rounded build for Archer in MapleStory 2. It provides the player with a decent DPS, no matter the content. It should do fine in both PvP and PvE. However, as far as the Boss damage is concerned, the second build, we present is better. Rapid Shot and Arrow Storm abilities are your priority in terms of maxing out. Put enough points into Conditioning to unlock the Sharp Eye. Using the Sharp Eye ability will unlock the bonus critical rate party buff, increasing your chances to receive the Bronze Eagle spawn.

- pop the Sharp Eyes to apply the buff immediately,

- use the Screwdriver Shot along with the Arrow Storm,

- while these two are on cooldown, spam Rapid Shot,

- use Bronze Eagle Claw, once it spawns,

This MS2 Archer build revolves around using the Agile Archer Passive to its fullest. The ability gives you enough piercing to call it worth in fights against bosses. Also, the build makes up for the expensive gear, if you cannot afford one. However, it is harder to play than the Sharp Eye build, and also it doesn't do well in other types of content, especially PvP. The playstyle changes in a way, that you put some more points into Ice Arrow, that you would typically use to skill the Sharp Eye and Eagle Claw.

That's all for your sniper, long-range, deadly killer in MapleStory 2 guide. Now equipped in a priceless knowledge, you can head straight into dungeon, raid, or encounter a World Boss. We consider you prepared for every type of danger.

What is the Archer class in MapleStory 2?

It doesn't differ that much from any other long-range, bow-using classes in various MMOs and RPGs. In MapleStory 2, the Archer class is all about dealing sustained physical damage from afar, relying on attack speed and critical strike. Outside of its offensive capabilities, it also has some supportive tools to buff the party.

How to play the Archer in MS2?

Basically, you stay out of the range of any opponents, using your core abilities off of cooldown. If enemies approach, you simply reposition with Evasive Salvo or Eagle Glide. Rinse and repeat.

Is Archer good in the MapleStory 2?

It's decent, dealing considerable damage, while still being useful to the party. It is a class definitely worth a recommendation for players, who like the measured, ranged playstyle.