MapleStory 2 is a free-to-play massively multiplayer online role-playing game (MMORPG) developed by NSquare and released by Korean-Japanese publisher Nexon originally on July 7, 2015, exclusively in South Korea, to be later available on September 21, 2017, in China and several months after Closed Beta in May and July of 2018, finally on October 10, 2018, on the global market for Microsoft Windows platform.

MapleStory2, as the name suggests, is the second installment in Maplestory franchise and is the prequel to the Maplestory. The game itself embraces its predecessor and builds upon it instead of drastically changing everything. It’s easily distinguishable from other MMORPG games by employing unique cute voxel graphic stylistic with a 3D isometric point of view.

As with other MMORPGs, players create and edit their own character, choose the desired class and later venture into the open world to look for new exciting adventures and nice new loot to obtain!

Just a quick note, I won’t be covering leveling aspect of the game nor activities, bosses, bossing, quests, PvP and other stuff related to it in this guide. Feel free to share this guide with your friends if they search for some guidance when it comes to choosing a class. Now that we have the introduction out of the way it’s to get to the meat of the article by tackling the subject itself - Classes.

Now we can get started with the actual subject of this guide. Maplestory 2 allows it’s players to carefully define their class, however, unlike in the previous game players don’t choose a specialized sub-class later on in the game (for easiest reference classes used to work similar to classes in Lineage II for those familiar with that title).

Instead, what player can do with his class is mostly based on the Skills they choose to acquire within their class.

In the first MapleStory player would, for example, choose a warrior to, later on, pick between subclasses such as Aran, Dawn Warrior, Demon Slayer, Demon Avenger or Hayato. Each of them was different in terms of primary attributes, primary weapons, hit and mana points and specials.

At the current time (January 2019) MS2 player picks one of the 10 classes available in-game (as opposed to original where players could pick between 5 base classes and numerous subclasses).

What is different is that later on instead of choosing a subclass, the player simply chooses skill they want to use by putting points in them. Each class has at least several builds available ranging from DPS (DPS stands for damage per second, a role traditionally dedicated to killing enemies as fast as possible in MMORPGs) focused builds to tank and heal/support ones.

Looking up viable builds, guides or similar things for the class of your choice is highly recommended if you are a player that cares about unlocking the full potential of his class or just doesn’t know how to correctly construct a build.

Here’s the example of a skill tree as seen in-game (this one belongs to the Priest class). 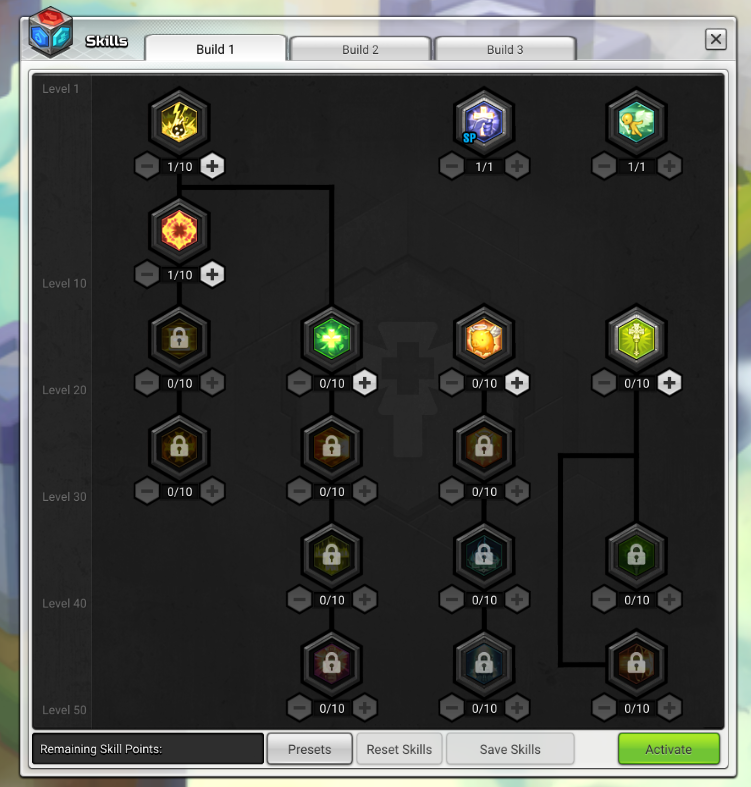 As you can see in the picture above each skill has to be unlocked first and then can be upgraded to increase its effectiveness, all of them beside two in the upper right corner, requires 10 skill points to maximize their power.

Another interesting thing this image shows is the three tabs above the tree itself. You can change between them allowing you to utilize 3 different builds on your character, giving it much more versatility when it comes to build options. The skills themselves are divided into 6 tiers, with each of the tiers assigned a specific level requirement your character has to meet in order to put points into the skill of the respective tier. Simply speaking you have to reach level 50 with your character before you start putting points into skills in level 50 tier.

The game allows you to reset your skill allocation by clicking “Reset Skills” button. If you are a non-experienced player you might find “Presets” button handy, as it gives you suggested builds.

To switch between three builds you have to select the desired tab and then press activate.

Weapon Used: Scepter and a Spellbook

Priest in MapleStory 2 is a class dedicated to healing and support, although they have a DPS build possibility you are probably better off picking DPS only class when going for that route. Priests rely on their plentiful healing abilities to keep team members alive, while they provide them with powerful stats buffs.

They are almost essential in any raid and have to always on their toes to keep every one of their allies safe and well. Basically, if you don’t mind the responsibility of being the main healer in a group and like playing support classes in general, Priest is the class for you.

If you want to know more about Priest, his builds, preferred attributes and mechanics click the link below, it will redirect you to comprehensive Priest Guide.

Knight is the best choice if you like tanky and sturdy characters, soaking up amounts of damage that would kill any other class with ease. Their endurance is not only the positive trait they possess, but they are also able to buff up their teammates and protect them from bosses and other foes with strong AoE shields which block damage, considerably increasing their chances of survival.

Knights are dedicated tank class in MapleStory2, while there is no classic threat system to speak of, Knight is the closest you get to the traditional tank from other MMORPGs. Similar to Priest he is capable of becoming a DPS, but keep in mind you’re not gonna be doing awesome numbers so you might want to go for a pure DPS class, if tanking/support role is not your forte.

Read more about this class in our detailed Knight Guide, link below.

Archers rely on their single target high damage output to take down even the big prey easily and put enemies in their place. One of the advantages of the Archer class is the long range of their skills and helpful disengage abilities that help you avoid danger.

If you want to join a group as non-magic ranged DPS that deals damage or simply looking for a fun class to play, Archer is a decent choice. As with other ranged classes, Archer is not very durable and can’t take a lot of damage.

Assassins use their very high single target damage and great mobility to both deal massive damage and avoid receiving (by using dash that teleports you a short distance and other abilities) damage themselves.

They are not very durable and lack any healing ability. Still, they are one of the easier classes to play. If you played rogue or similar classes in other MMORPGs you might be surprised because Assassin in Maplestory 2 is ranged class, not a melee one, so keep that in mind if you want to pick Assassin.

Berserker is really versatile in terms of his attributes, having both high single burst and AoE (AoE stands for Area of Effect) dealing decent damage while being tanky and possessing strongest heals after the priest.

Berserker is a good choice for people looking for a class that is easy to play, has pretty strong solo potential and doesn’t rely on magic damage. Berserker is simply speaking MapleStory2 version of your archetypical warrior/barbarian from other MMORPGs.

Wizards can dish out huge amounts of single and AoE damage with its attacks while being mobile on top of that, similar to assassins they have multiple instant dashes making running away from danger quite easy.

They are very squishy and their magical shield is useful albeit not sufficient enough for soaking up high amounts of damage. Use speed and mobility as a safeguard, you are less likely to die by being on the move.

Thief is definitely the hardest class to play as, he’s capable of dishing out good damage with its Poison and skills but due to very high skill cap and complicated class mechanics he’s prone to being on the low end of damage scale, he’s not recommended for new players unless you’re up for a challenge or having a hard time getting into raid parties. Not many players are able to fully use its potential.

Soul Binder class is a hybrid of DPS and Support, able to provide average single target damage output and decent AoE in combat, it has good mobility and is quite tanky with its heals and shields. Soul Binder is the latest class added to MapleStory 2. Soul Binder is a not a bad choice for people who can’t decide whether they want to be DPS or Support in the party.

Whenever serious firepower is needed, Heavy Gunner comes to the rescue!

Heavy Gunner is capable of doing medium to high DPS, has some disengage and escape abilities allowing to put some space between him and enemies albeit not as many as Assassin or Wizard. As a side note, Heavy Gunner has the fastest mob clearing in-game when compared with other classes.

Did you always want to play a class that utilizes magic attack and blade in equal portions but other MMORPGs left you with no such option? Then Runeblader is the class for you! This class uses both its sword and magical abilities to dispose of boss enemies and other undesirables you might face while fighting your way through dungeons.

Classes listed in terms of difficulty to play from to lowest to highest to help you quickly check the most beginner friendly class or most difficult one.

MapleStory 2 Berserker Build - a guide to chopping the enemies down