Oh, Materia! That beloved Materia! That special element that we all knew in Final Fantasy VII, at the end of the last century. Materia already appeared in this marvelous game and nowadays takes us back to our best years, when we were young and we were enjoying, probably, one of the best video games of History. Now common Materia has returned in a totally different way in this magnificent game, Final Fantasy XIV: A Realm Reborn.

In this article you will find:

* What do I get Materia?

If you played the classic Final Fantasy VII, or you are starting to play it, then you know what Materia is about. In case you never played FFVII or you simply don't know it, a piece of Materia is an elemental item, a very special kind of crafted stone that you can attach to your equipment, gear and other items, which in turn gives you a bonus and allows you to convert and improve their powers a little bit and level up their stats. Materia system is based on a mechanic that allows you to gain strength in a lot of aspects. Furthermore, Each Materia improves the stats of your Disciplines of War or Magic equipment in a totally different way and grade.

As you should know, if you want to attach Materia to some piece of equipment it is necessary that the specific equipment has a socket(s) available. These mechanics necessarily require these equip available spots. Not all the weapons and gear in the game have sockets. Only equipment with a certain level has these attributes and some of them even have four or five spots available and more.

Attaching is a crafter ability that, like many others, it is not always successful. Currently, you can lose many Materia if you don't have the necessary strength or skills to execute the action. In addition, to get Materia you will need a special skill and a certain level, very similar to your equipment level. Now we are going to learn how to get Materia.

How do I get Materia in FFXIV? 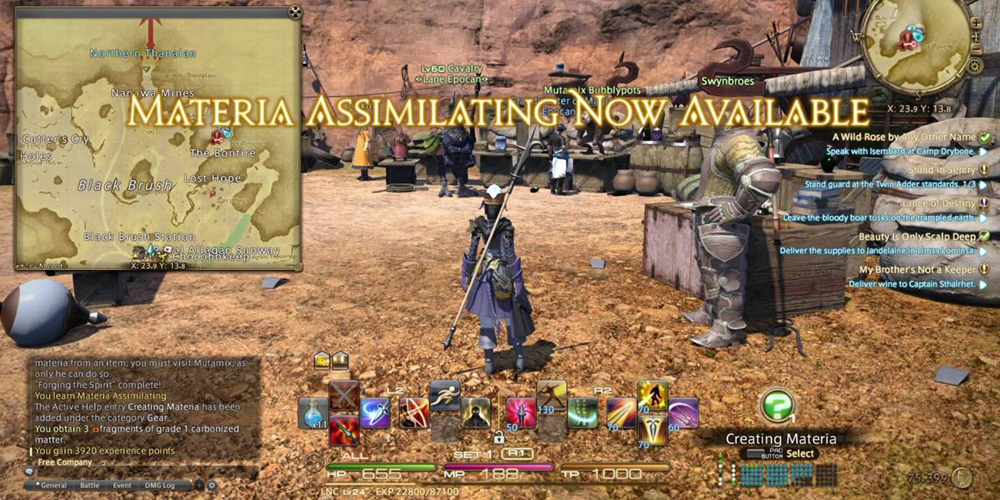 Basically, there are two methods to make Materia in Final Fantasy XIV: A Realm Reborn. The first method is buying or exchanging it, that is to say, trade it for Gil or other items. The second method is Crating Materia for your own. Let’s explain both ways.

On the market boards that you can find in all Eorzea, mainly in the three great cities, you can search and buy all types of Materia (Purple Materia, Blue Materia, etc.). But let us tell you that the price of Materia that is offered in the Market Boards usually is crazy. And if this is not enough, you will have to pay a large amount of Gil for a 'package' of basic Materia. Also, occasionally, you can exchange some Materia from the other users in the game, for sure, but. in general, this Materia is a random Materia or not so good or it is a low level Materia.

We believe this is the easiest way to get Materia in Final Fantasy XIV because it is totally up to you. The pieces of equipment with 100% of Spiritbond can be converted to Materia. Actually, this percentage of Spiritbond increases every time you use that piece of gear in crafting, gathering or battle. You can check the percentage of Spiritbond in the stats of every piece of gear individually. If you have available space in your inventory, you can hold onto and save the Materia you created here.

Unlocking the ability to create or extract Materia requires that you complete the level 19 Side Quest ‘Forging the Spirit’. To unlock and access this quest you have to reach the level 19 in any of the Disciplines of the Hand, except Culinarian. The quest giver of this quest is Swynbroes, a male Roegadyn non-playing character (NPC) located in Central Thanalan. Note that to access this quest you have to complete the previous Main Scenario Quest ‘Life, Materia and Everything’.

In ‘Forging the Spirit’, Swybroes will ask you to disseminate the secrets of Materia extraction. Upon completing this mission, Swebroes will teach you how to extract and create materia out of well-worn equipment. When you finish your training, you can put your new ability into practice. Now you have acquired Materia Assimilating. Also, you will receive 3.920 experience points. Finally, you can set this skill in the main menu and put it in the hotbar. 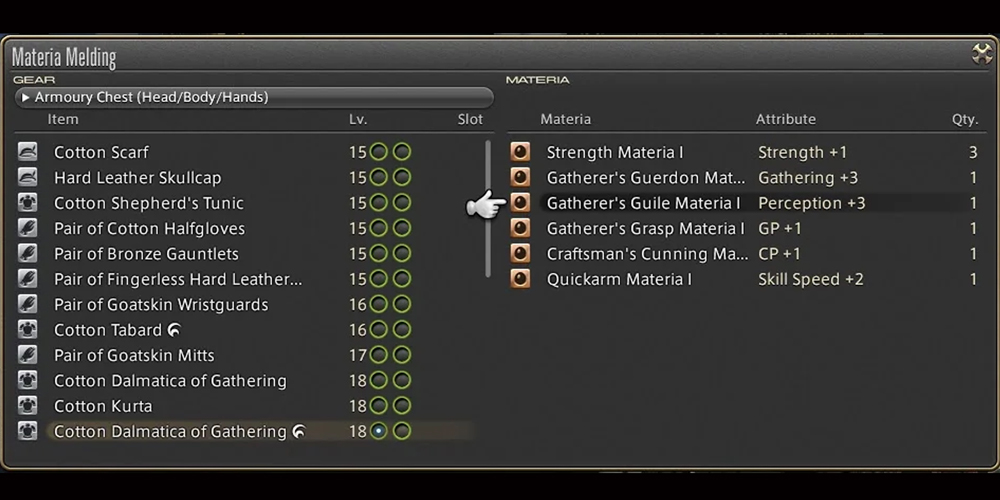 Using Materia is kind of simple. The type of Materia you extract depends especially on the class of the piece of equipment from which you obtain the converted Materia. There are various types of Materia, specifically 13. It means, if you extract a Materia from a piece of equipment that is designed for a Gladiator, with this Materia you will be able to increase the physical damage and the melee damage. When you attach this, it should have given you a bonification. The same happens with Dexterity, Pity, Intelligence, Accuracy, Vitality, Parry, etc. In another example, Determination improvements can come from any DoW/M gear. The following is a table which indicates you what type of Materia you are going to receive when you are creating Materia from different pieces of gear.

Additionally, when you have a piece of equipment with an available socket(s), the first thing you have to do before attaching the Materia it is to see which ones are compatible with the gear and the success rate. Some gear do not allow more than one type of Materia, it does not matter what you do. Instead, these gears allow you to put many Materia. Remember that, depending on this success rate, the attaching could be a failure and the Materia will break and be lost. Due to this, you can lose both the Materia and the available socket. But we are going to talk about Melding later in this same article. Now let’s take a look at Materia tier.

As you already know by now, the Materia you get when extracting and the stat that is increasing depend on the type of gear. Now you have the list of the Materia you can get in Final Fantasy XIV: A Realm Reborn.

Now, depending on the Materia tier, the stats will be increased to a greater or lesser extent. 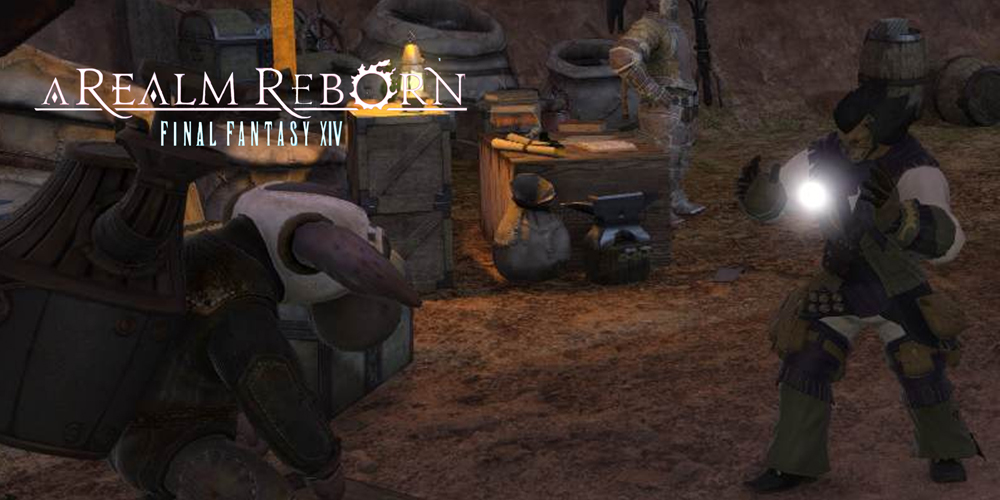 Materia Melding is the second part, maybe the most important part, in the process of extracting and attaching Materia. In one sentence, the obtained Materia can be fused with your gear. Once you have created, buyed or exchanged the Materia, you can select it and meld it in the piece gear you have chosen to gain its effect.

But first, to meld Materia you have to complete the quest ‘Waking the Spirit’. This level 19 quest for crafters is available in Central Thanalan, very near Swynbroes, in the same place where you complete the first quest mentioned in this guide, that is to say, in The Bon Fire. In this second quest you have to talk with the NCP F’hobhas. F’hobhas is willing to train you the secrets of his Materia Melding. Talk with her to start with your training. One you have finished with this, you can start to attach Materia to your gear. But remember, to complete this quest you will need to have reached the level 19 in any of the Disciplines of the Hand.

Now, it is possible to meld more Materia to a piece of gear that doesn’t have available Materia slots. For such purposes, you need to complete the level 25 side quest ‘Melding Materia Muchly’, that is available in The Bonfire, in Central Thanalan. You must talk with the goblin Mutamix. He is willing to train you in the secret of his Materia Melding special technique, but first you have to prove to him that you have certain experience in the field. At this point, you have to try to melt Materia eight times in front of him. Once you have completed the challenge, Mutamix will teach his secret technique. This practice is called ‘Advanced Materia Melding’.

Despite having learned this ability, the melds has a certain chance of working and still can be a fail (that depends on your skills and the Materia used). Keep in mind that you can always talk with a Materia Melder NPCs, who are special NPCs in charge of Melding Materia and have better chances of melding. These characters can be found in all the greatest cities, always very close to the Market Board. These Materia Melders help you to meld Materia and will assure you a higher percentage of effectiveness in the process of melding. Then you can retrieve the melded Materia, when you acquire the ability 'Desynthesis'. Finally, melding Materia has limited daily and weekly tasks, which you can do to get experience points and a good amount of Gil.

FFXIV How to use Materia guide conclusions 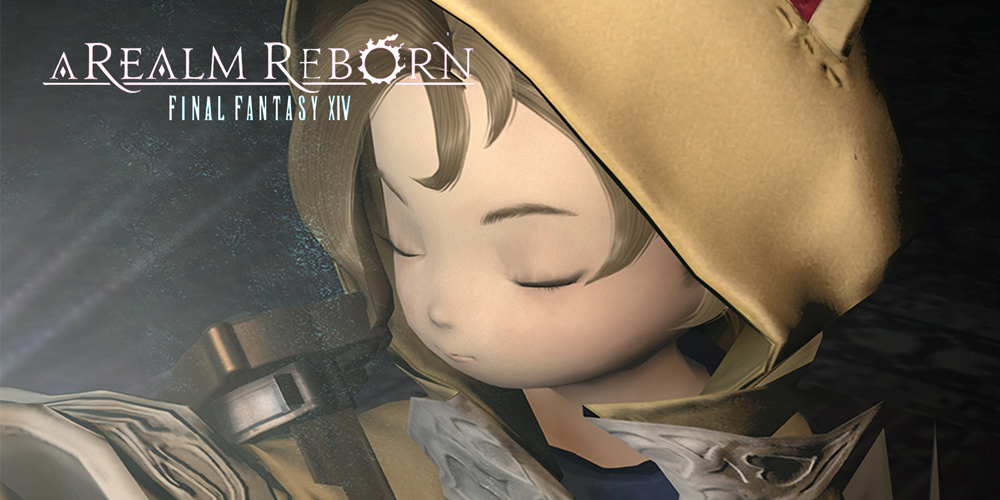 FFXIV Materia is one of the most interesting current things that expand the possibilities of the gear in Final Fantasy XIV. Since the updated version of the patch 1.19, this marvelous game has brought us back this precious feature that is no longer lost in the annals of History. People love this Materia system; we know this. We agree because we believe Materia is one of the best rewards players can have. We got the same feeling. Thanks SquareEnix for bringing Materia back to us! We believe, personally, Materia accessories helps to personalize even more all the decisions you take in Final Fantasy XIV.  If you are interested in other content or guides, check our FFXIV Leveling Guide. Just click here and start with the journey!  Also, you can check our offers or leave a comment in the box below. Just create an account, it is very easy. Finally, stay tuned, we are uploading many other guides soon.

How do I get Materia in FFXIV?

There are three ways to obtain Materia in Final Fantasy XIV: A Realm Reborn online. First, buying it in the browser of the Market Board of the great cities. Second, exchanging it with other players inside the game. Third, creating it by yourself.

How do I use Materia in FFXIV?

First of all, you have to learn the skill Materia Assimilating. With this, you can create or extract Materia from pieces of gear. Then, you need the skill Materia Melding, with which you can attach the Materia to any piece of equipment with an available slot.

Yes, Materia is one of the most important features in FFXIV but not essential. You may go forward in the game without the need of obtaining, creating or melding Materia, even cracked Materia or Carbonized Matter. But, at some point, Materia could be a great advantage when you are part raids in dungeons or when you face powerful bosses.

What is Overmelding in FF14?

This is when you exceed the available number of sockets available and attach more Materia than a piece of gear can carry. With the skill ‘Advanced Materia Melding’ you can use Overmelding and give more power to your old piece of equipment.

FF14 Desynthesis Guide - The best path to get the best materials!