Black Desert vs FFXIV - Which MMO is better

Black Desert Online (BDO) and Final Fantasy XIV: A Realm Reborn (FFXIV) share a lot of features, but also have many differences that separate them quite a bit. Regarding the similarities, both are great MMORPGs that take place in an open world of fantasy, just like other MMOs, such as Elder Scrolls Online (ESO), Guild Wars 2 (GW2), EVE Online, or World of Warcraft (WoW), among others.

Regarding the differences, the gameplay of both are very different, so it is worth inquiring into them. In this Black Desert vs FFXIV article, we are going to investigate these questions and try to find out which game is better.

* Which game should I play, BDO or Final Fantasy XIV?

Which game should I play, BDO or Final Fantasy XIV? 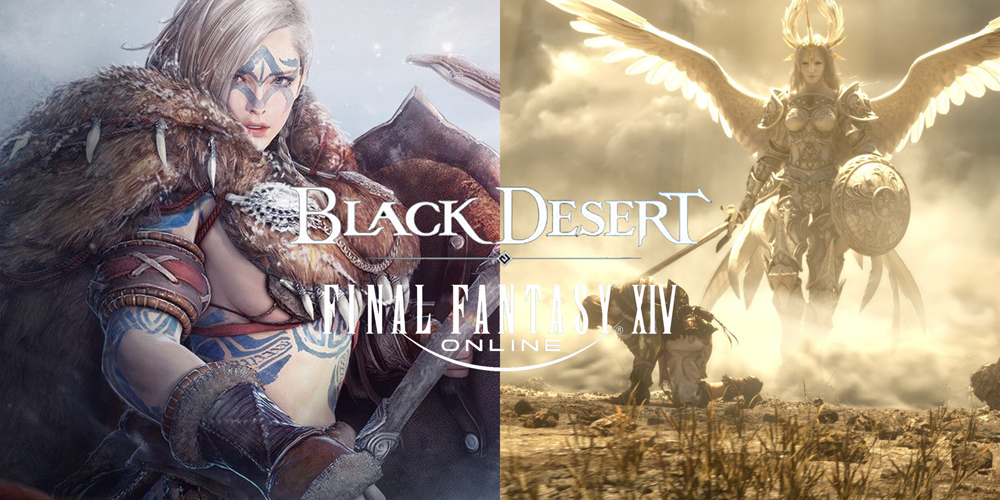 To start, we don’t believe that there is a better game than other, just personal preferences. If you are a fan of FF Franchise it is very likely that you love FFXIV ARR and all its expansions because, let’s be honest, this game goes back to the old school of the first FFs.

Black Desert Online, as you may know, is a relatively new game (it was released in 2015), so its narrative and mythology are new as well.

But, contrary to what may be thought, this is not a problem. What’s more, it is a plus since the new mechanics and lore are added to the vast world of video games. Even more, the success of BDO has been such that last year PS4 and Xbox One versions were launched.

Next, we are going to expose some specific points of both games for you to take your own decision. 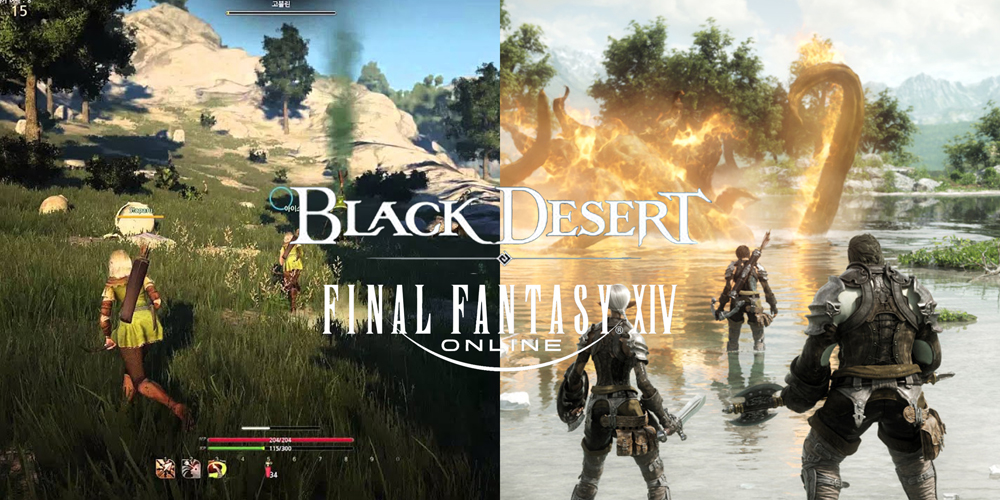 When you play BDO, and then you focus on FFXIV, you notice the gameplay in both games is pretty much the same. Actually, almost every MMORPG that is released nowadays has very similar mechanics and integrations. Although this may mean that FF14 and other classic games such as RuneScape or World of Warcraft built the path for any current MMO.

Talking about the gameplay in BDO, this game includes several features to help players immerse themselves in the sandbox aspect of the game.

One of the main elements is the dynamic of the world, that is to say, the changing weather and the system of day and night. Depending on the conditions of the weather, events, NPCs, etc. the interactions with the environment change, in addition to the lighting conditions.

The combat system in BDO requires constant interaction and great abilities in aiming, dodging, using combos and attacks. This system is quite similar to what you can find in third-person shooter games, which differentiates it from other MMOs. Also, the battles can take place on mounts, which makes mounts a very important element of the plot of the Black Desert.

Regarding Final Fantasy 14, Eorzea also has a day and night system, but it doesn’t influence too much in the events, only in the creatures that can appear in certain zones. The weather is not changeable either. Instead, the FFXIV has several areas with different weather and environment: woods, islands, deserts, snowy mountains, volcanos, etc.

As for the action combat system, this works through the Hotbar, a quick menu that you can configure to adapt it to your requirements. The Hotbar shows you the skills that are available, which you can use in a shift system. 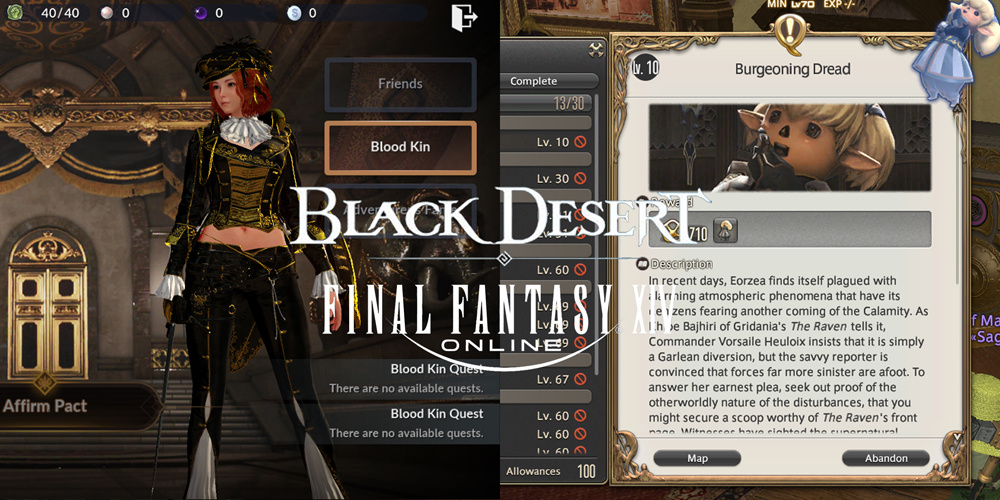 In both games, the story and the Lore are very simple, and that is something that is appreciated. Many MMO players hate the confusing stories and backgrounds, so this is a plus point in both games.

Everything in BDO, since ancient times, revolves around the confrontation between two countries: the Republic of Calpheon and the Kingdom of Valencia. Both Nations are fighting for the control of the Black Stones, singular ores that contain great and secret power.

The content of FFXIV unfolds then a great war and the Great Calamity, which has brought death and peace to the regions that make up Eorzea. In this context, all the former warriors decide to earn a living as adventurers, who accept quests and orders in exchange for money or reputation. These adventurers look for their destiny to join the Guilds.

Talking about quests, BDO has seven types of quests, and each of them will reward in a totally different way.

Next, you have a list of those quests and their respective description.

Regarding Final Fantasy XIV: A Realm Reborn, you can find several types of quests, from the MSQ, which lead you through the main story, to quick quests that are perfect to earn Gil and experience, such as crafting professions quests or quests in which you have to show your life skills. Next, you have a questing list: 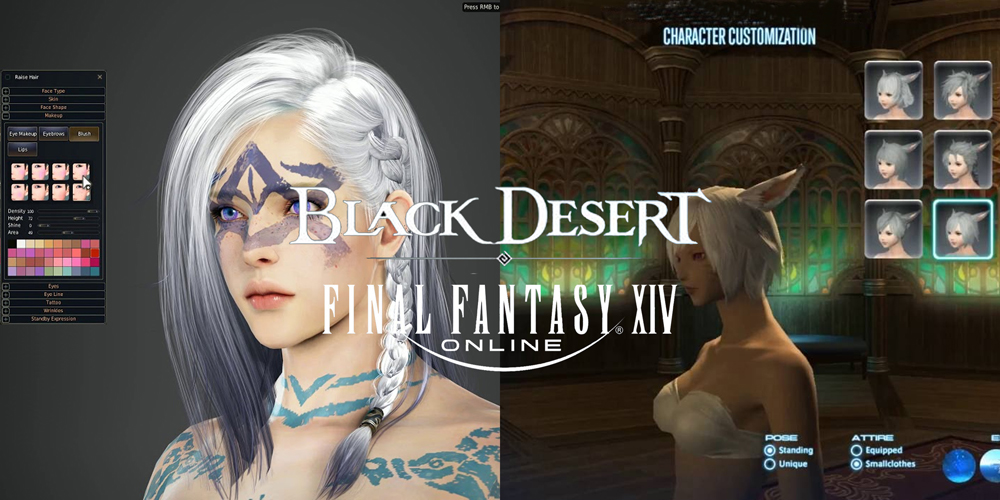 The character creation in FFXIV has several functions, options, and starter races. With the option of choosing among a variety of races, the phenotype of your character will change, as expected. After your choice, you have the chance to personalize the specific parts of the body of your character, for example, ears, eyes, mouth, size, weight height, etc. The races available in FFXIV from the beginning of the game are the following:

Black Desert also has several races and classes, although a little better known to people who are not used to any MMORPG. These races are the following:

There are plenty of ways to trade, exchange, buy and sell goods in FFXIV and Black Desert. An interesting thing about FFXIV trading is the Market Board, an in-game platform where you can buy and sell items, and a good number of unique pieces of gear, armor, weapons, swords, etc. at the best price.

In addition, you can talk directly with the community, other users, and propose an exchange. Someone will be interested in time if you are patient.

Of course, it is not the best way to assure obtaining good things, but from time to time you will get a rare piece.

Regarding Black Desert, there are two ways to do the trading activities: through Trader Manager or via the Auction House. The items you get vi Trader Manager cannot be sold in the secondary market. On the other hand, in the Auctions House, you can bargain a few items thanks to the points of energy. 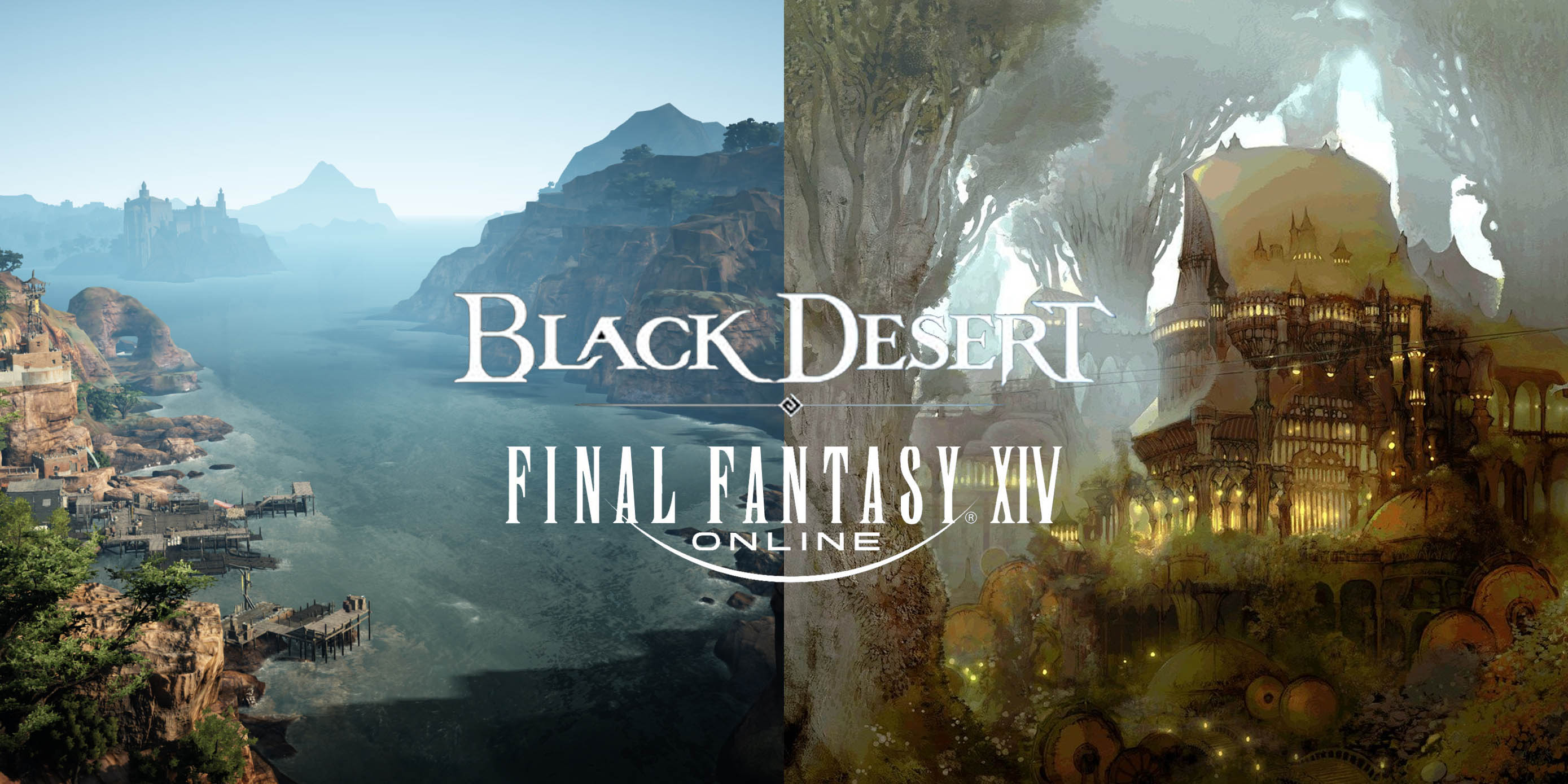 Crafting, Gathering, Fishing are integral parts of any MMO. These elements feed and enrich the plot of the game, expanding the possibilities and avoiding the lack of sense. Furthermore, the purpose of these mechanics is to improve the stats of your characters or get hold of some hard-to-get items.

Anything you can see on both games is a sign of the plot, the concept, and the art behind them. On the other hand, the graphics are a good sample of the engine of the generation.

The strong point here is the contrast and the good chroma handling.

Both games have PvP and PvE systems, through which you can gain lots of rewards facing other players and enemies. Dungeons Raids or take part in the Gear Grind also are a good path to get experience and Gil.

Black Desert and Final Fantasy XIV A Realm Reborn offer two of the best MMORPG experiences of the world of video games. Both games are at the top of the pantheon of games and have millions of fans around the world.

Regarding the first one, it was published for Microsoft Windows in 2015, and for Android, iOs, Xbox One, and PS 4 in 2020. Playing BDO offers us a great experience in a middle-earth-like universe, where magic and strength are the strongest weapons available.

FFXIV, released many years ago (we hope to see a new version soon on PS 5), is the type of MMOs that combines perfectly the sense of the magical world with the structure of a technological world. When the player goes through FFXIV, they realize this setting and we can only say that it is a great one.

In a quick view, the gaming, the play style, and feeling when you play  FFXIV and Black Desert are quite different, but both keep the spirit of the first and classic MMOs. In fact, the sensation of adventure in these ones is primordial. This is a good reason to play both. 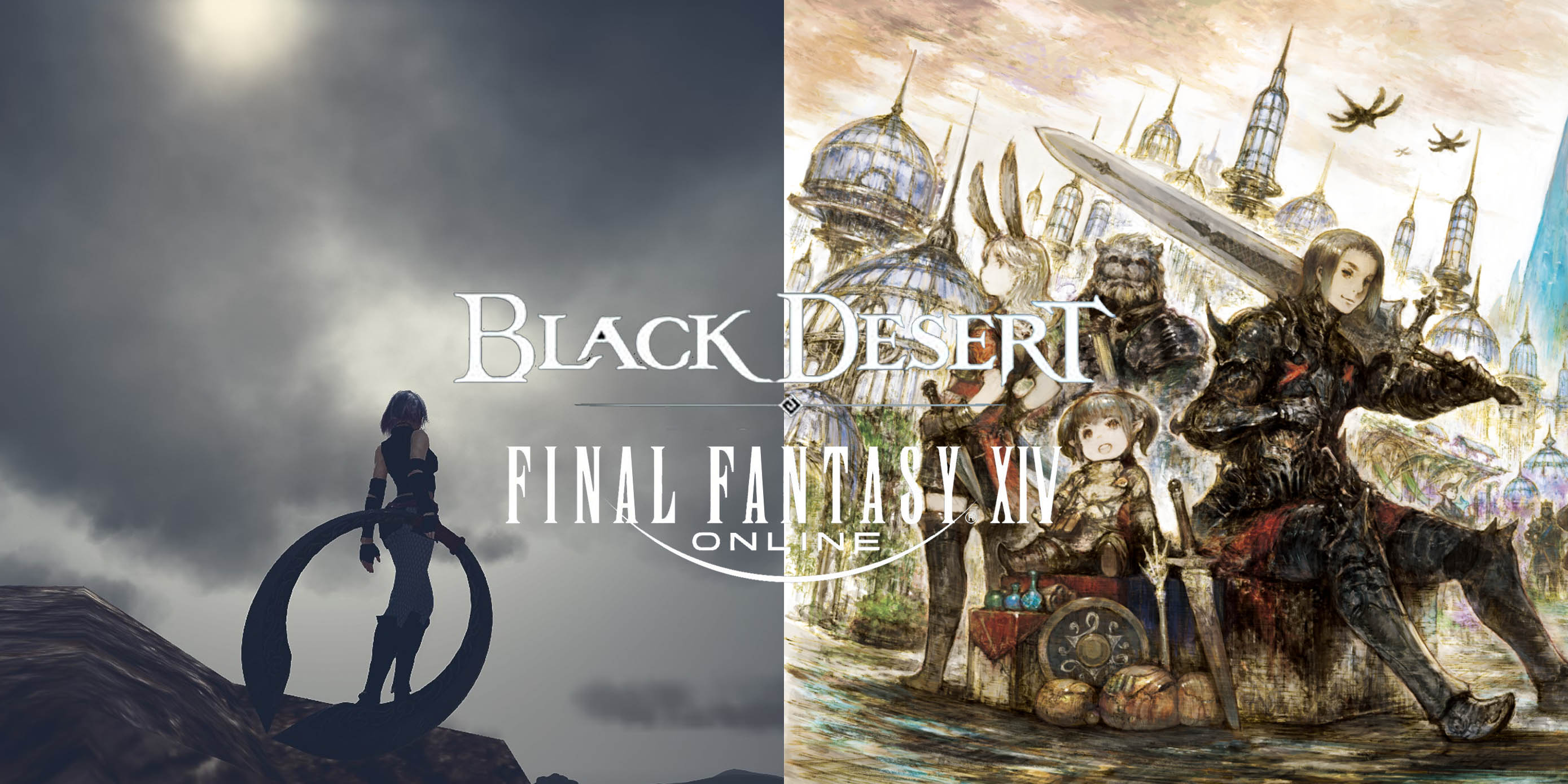 So far this report on these two excellent games. Thanks for taking the time to read our thoughts in this post. If you are interested in other posts about these two games, you can browse our web site and check the other articles we have for you. Also, if you want to read about something, some special guide or whatever, just tell us, there is nothing to prevent it. Just keep your attention; you will have news very soon.

Furthermore, you can access some special offers at the best price in the section ‘games’. We invite you to be part of our community, follow us on Social Media, create your account with your email address, follow the thread, to stay connected. Finally, if you have any question, feel free to leave all the comments you want, we are eager to know your opinion.

At the endgame, which game is better, Black desert or FFXIV?

We don’t believe that there is a game better than the other. Probably, if we make a survey the votes would be fifty-fifty. If you have some of the versions for PC, PS4, or Xbox One, give both games a chance. Then choose the best for your convenience. In the end game, you will thank us.

According to general opinions, the answer is no. Of course, if you want to access all the content in both games, you need to pay. But within the game, there are no differences between players regarding if they pay or not. BDO has a cash shop, which is a good alternative if you want to improve quickly in the game.

Do I have to pay a subscription to play FFXIV?

The business model of FFXIV works based on differential subs. In this subscription model, you pay for the numbers of characters you can control in any server. In the basic, you can control 8 characters. In the higher subscription, until 40. Of course, you don’t have to pay any fee for this. For more details, visit the FFXIV Lodestone.

All trademarks are the property of their respective owners. All rights reserved. Copyright 2021.

How to Buy a House in FFXIV? A Comprehensive Housing Guide!

How to Get a Mount in FFXIV? A Complete Mounts Guide