FFXIV Races - Choose the best race according to your personality!

One of the strongest points in Final Fantasy XIV A Realm Reborn is its incredible land full of amazing FFXIV races. It is very common to find very unusual but playable nations within all the games of the Final Fantasy saga. The Lalafelll race, the elves, and the human race have been part of the awesome world of the FF series. FFXIV is not the exception. Races such as Viera or Hrothgar returned to the series in the last expansion. Here, in this guide, we introduced Final Fantasy XIV Races, so you can choose that one that suits your personality.

* What races are in Final Fantasy 14?

What races are in Final Fantasy 14?

Final Fantasy XIV: A Realm Reborn has a good number of races, many of which were retrieved from previous games, but here they have a new appearance and are better achieved. In this guide of Final Fantasy XIV races, we are going to describe each of these races for you to choose the one you like the most. 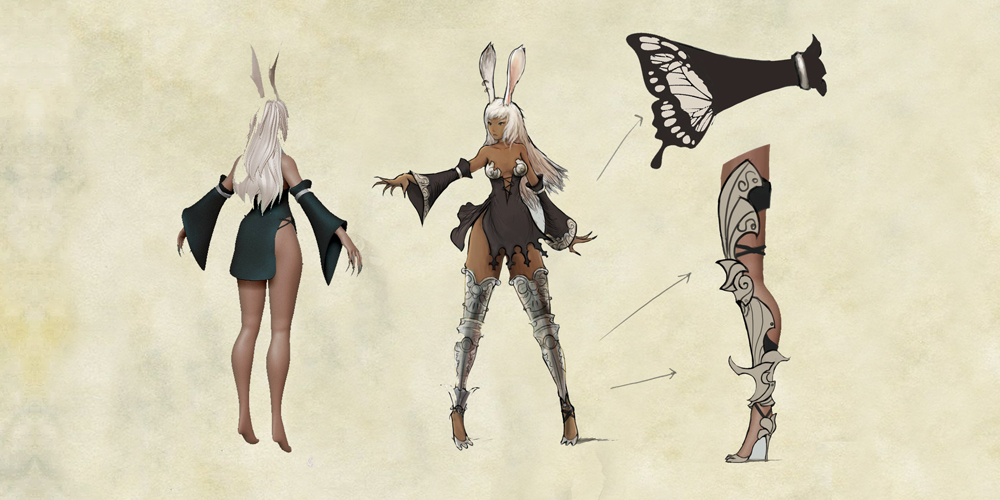 FF14 Viera race is a new and unique race of Final Fantasy XIV introduced in Shadowbringers, the last expansion of A Realm Reborn. Originally, Viera was presented for the first time in the Final Fantasy series in Final Fantasy Tactics Advance, but became popular in Final Fantasy XII, thanks to Fran. Viera is the only race in FFXIV almost entirely female.

Often, the players think that the look of FFXIV Viera is very particular. Viera is a bunny-like race, with humanoid aspects but with large ears. When they are young, Viera looks like they do not have gender and are identical at birth until they are 13 years old, when the male (less than 15 %) starts to show some sexual dimorphism. Male Viera are rarely seen inside any village.

Most Viera live in the forest avoiding the conflict and never go outside. When they want to leave their home and go to the cities, then they have to claim the Green Word.

The Rava clan lives in the Golmore jungle and it is distinguished by its umber skin, which allows it to blend in with the environment. The rava females are hunters and the men are just wards of the forest.  Rava has low Vitality and High Dexterity.

Unlike the Rava Clan, the people of Veena have white skin. As the members of the Rava clan, the Veena are gatherers and hunters and make their homes in the forests lining the southwestern in the Skatay mountains. 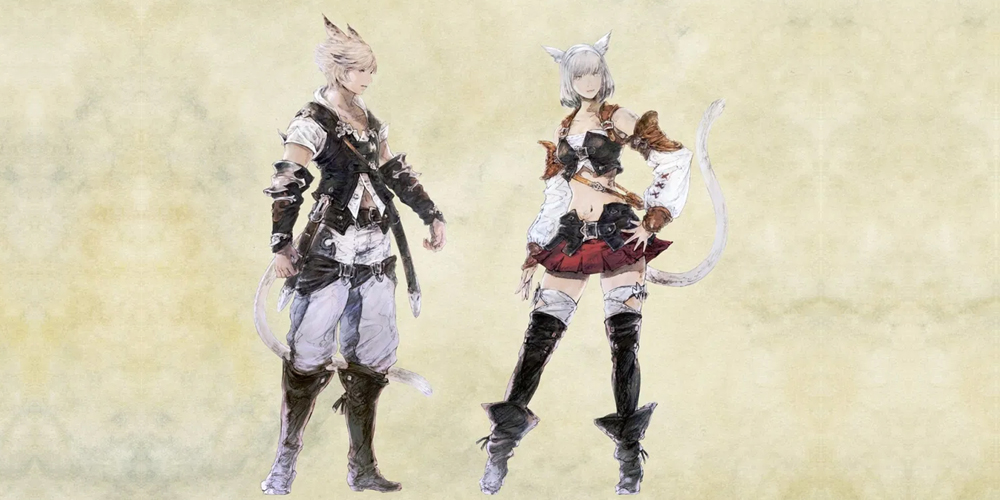 Miqo’te race is, perhaps, along with Elezen, one of the two races that players more use for their characters in Final Fantasy XIV, and yes, due to his feline appearance. Miqo’te is a cat like race, that is to say, they have big ears and long tails. Miqo te is not like other races. The ancestors of this race came to Eorzea during the Age of Endless Frost, in the Fifth Umbral Era. Actually, this race inhabits the deserts, so far away from the greatest cities, although it is possible to see a lot of miqo´tes in cities such a Ul’dah and Limsa Lominsa.

Seekers of the Sun

The Seekers of the Sun live mainly in the Sagolii Desert and in Gyr Abania. They are shorter than the other races, have brown skin, great agility, stamina, and can run for hours. The seekers of the Sun are adept at diving and climbing and most of them are really great sailors.

Keepers of the Moon

The Keepers of the Moon live in the Shroud. They are hunters and nomads, which has led them to have many conflicts with the people of Gridania. They have a longer tail than their cousins, the Seekers, and their fur is dark as the night. 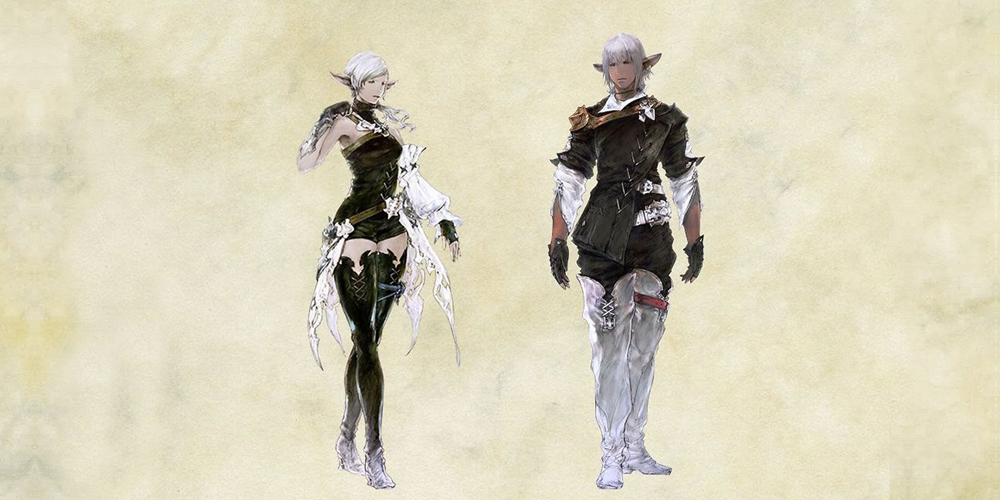 In Final Fantasy FFXIV: A Realm Reborn, the only race that has claimed sole dominion all over Eorzea was the Elezen race. This race looks very similar to the Miqo'te race, but make no mistake, they are quite different: Elezer is an elf like race. The Elezen race is among the older races in Eorzea. In addition, the Elezen have the strongest sense of honor, intelligence and pride in the world of Final Fantasy XIV.

The Wildwood Elezen live in the Black Shroud (Gridania) and in Coerthas (Ishgard). They are long limb people and have large ears (their appearance is elven) allowing them to have a keen sense of hearing. In addition, Wildwood flaunts a natural affinity with magic.

The Duskwight have made their home in the forest caverns for centuries, mainly in the Black Shroud. They look similar to their cousins. The only difference is the color of their skin, which in their case is darker due to their style of life. 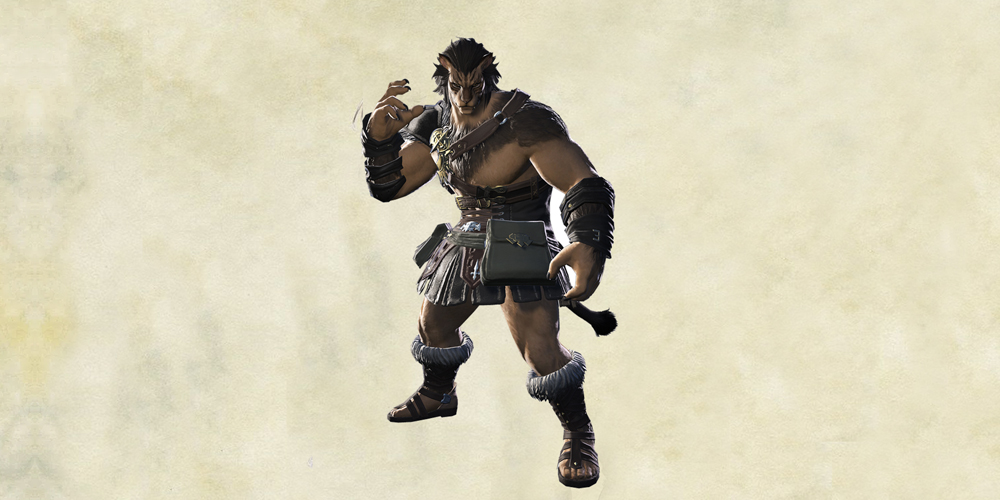 Hrothgar is the other race that made their debut in Final Fantasy: Shadowbringers, just like Hrothgar is another feline-like race, just like Miqo’te. According to the fandom games community, the appearance of Hrothgar reminds us of Kimarhri, the legendary character of Final Fantasy x, and we agree.

Hrothgar lives in Ilsabard, a continent in the northeast of Eorzea. They are divided into two clans,

The Helions, unlike The Lost clan, have brown fur over all their bodies. In ancient ages, The Helions could be founded in the southern region of Ilsabard but now live in all Eorzea. The only reason for life for Helions is their queen, for whom they are capable to lay down their lives.

The Lost always have been free spirit people, with a nomadic lifestyle unbound by the desires of the monarch. The skin of The Lost is white and grey, and they are capable of completing great journeys only by foot and handling a lot of jobs, from peddler to sellersword. 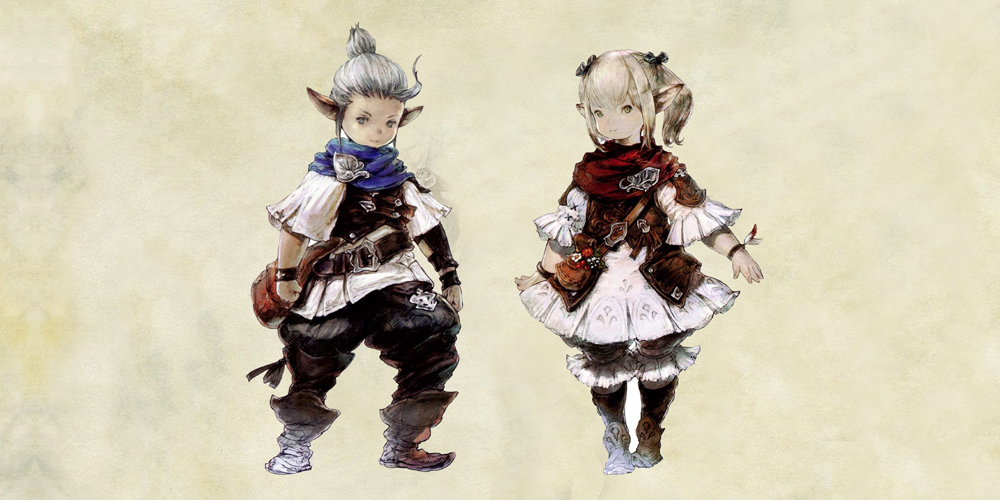 Lalafell lives, mainly, in Ul’dah, the great city of commerce located in the desert of Thanalan, to the south of Aldenard. Papalymo, Tataru are two Lalafells of the Scions of the Seventh Dawn. Papashan and the Sultana Nanamo Ul Namo of Ul’dah are two of the most recognized Lalafell.

Plainsfolk are common traders in Limsa Lominsa, which is why they settled in that city many years ago. Furthermore, Plainsfolk are predominantly farmers, but always very close to Limsa Lominsa looking for protection. They are short and they lack strength but they have a great sharpness of mind and swiftness.

Dunesfolk are the founders of the great city of Ul’dah, formerly known as Belah’dia and Sil’dih. The Dunesfolk have a strong temperament, which is perfect for the business of that great city. 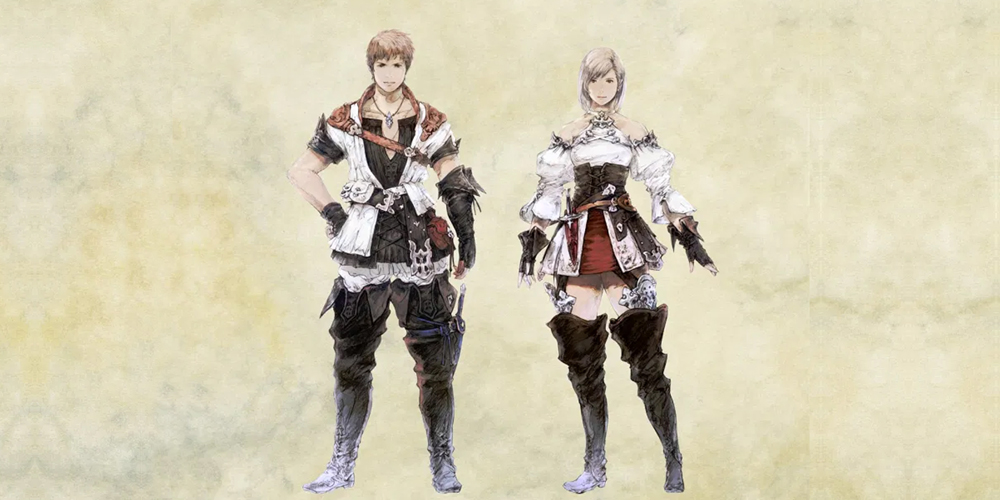 Hyur represents the largest population in Eorzea. The Hyur are said to have been the first race to have come to this continent from surrounding islands and continents. Hyur are average in all senses compared with other races, physically and mentally, in terms of build and height. Hyur is a particularly short race and travels long distances on foot. Hyur race is divided into two clans: the midlanders and the highlanders.

The Midlanders are established in every city in the Realm, living really versatile lives and in a different kind of business. The midlanders are, probably, the most educated race in Eorzea because they are trained in the art of letters. Midlanders are poets and bards and the difference between males and females is just a few centimeters. 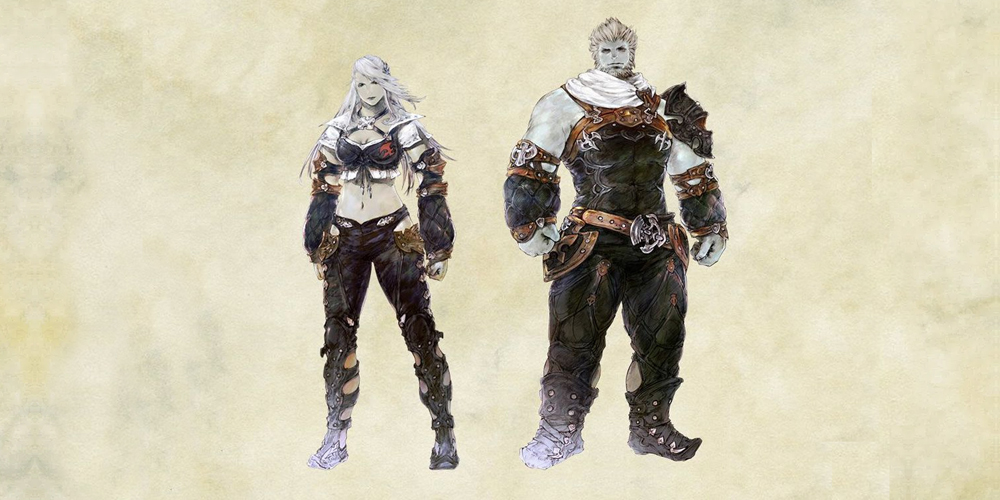 Roegadyn are muscular people of the north of Eorzea, from the northern seas. In Final Fantasy XIV, Roegadyn lives mainly in the great city of Limsa Lominsa and by the sea as fishermen. Also, many of them work like pirates and/or mercenaries. They are considered one of the most dangerous races of Eorzea.

Many of them belong to the Sea Wolves tribe. The Sea Wolves, many years ago, were brutal pirates of the north seas. They are native to the islands of the Northern Empty but they arrived on the main continent looking for new zones for fishing or pirating. In the present times in the game, The Sea Wolves still have a strong presence in the island of Aerslaent, their homeland.

Another clan of the Roegadyn is the Hellsguard. A member of this clan is characterized by a strong and enormous body, with huge muscles and strong temperament forged by the heat of the volcanoes of the regions they inhabit. The Hellsguard clan doesn’t have a city to call home. Due to this, the Hellsguard live in different cities of Eorzea, selling their services as a sellsword.

Roegadyn appears in other games of the Final Fantasy series, particularly, in Final Fantasy XI with the name of Galka. The gamers know what are we talking about. 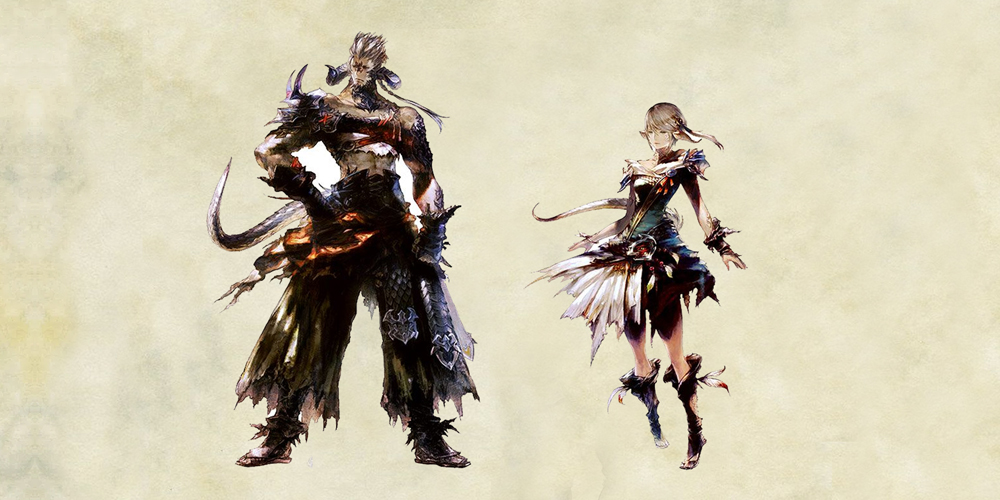 Au Ra is a rare race in Final Fantasy XIV: A Realm Reborn introduced in the expansion Heavensward. Out of all races FF14, Au Ra probably is the rarest race that you have ever seen in a FF game. Au Ra are a like-man race with big horns, scales and are very tall with blue skin. These features make scholars think that Au Ra is the progeny of dragons.

Anyway, this dispute is under discussion because there are clear differences between the two Au Ra clans: Raen and Xaela. This nation is native to the Far Eastern Continent, Othard.

The Raen tribe promotes a life of solitude and tranquility, very far from the tribal conflicts. Raen also abandoned the nomadic lifestyle and they settled down in the valleys of Othard’s mountains.

Xaela, on the other hand, is a tribe of adventurers, free spirits men, who roam the vast steppe of Eorzea looking for adventure, fighting, hunting, and gathering all types of rewards, just like their ancestors.

We know that to take a race in FFXIV is not easy. For this reason, starting with one of the eight races that is a perfect match for you is a very important step for you to feel comfortable. The election you made will influence many aspects of your gaming, especially the abilities of your character, his progression, and all his stats, even how you play.

At the beginning of the game, you will have to choose any of these races and personalize it. At this point, your adventure will begin. Though if you think you made a wrong election, don't worry, there is no better race, all are different and have their own potential. In addition, the Lore adds very interesting aspects to each class. This way you feel you are in a real story, one worthy of the Final Fantasy saga.

If you need or you are interested in others of our articles, you may explore our website and read the latest pages we have written for you. Also, you can follow us in all our social media to find out all the news or leave a comment below. Soon we'll be uploading more guides.

What is the best race in Final Fantasy XIV?

According to the fandom apps, and the save community and wiki activity, the best race is Au Ra, at least the most popular nowadays. Miqo’te race is another common election between new players due to his feline appearance.

What races are available in the starter pack A Realm Reborn?

If you make a quincy wikis search, you can notice that you have 5 races available at the beginning of the game. Miqo’te, Lalafell, Hyur, Roegadyn, and Elezen. The other races were introduced in the expansion of Heavensward and Shadowbringers.

What races were included in the expansions: Heavensward, Stormblood, and Shadowbringers?

As we mentioned, Viera FFXIV is included in Shadowbringers, like Hrothgar. Au Ra, on the other hand, was included in Heavensward. All the other races are available from the beginning of the game.