FFXIV How to dive - put on a swimsuit, and let's take a deep dive!

Final Fantasy has undoubtedly rewritten the whole course of gaming history. The iconic saga is printed in the mind of millions of players around the world. With its ups and downs, Final Fantasy managed to climb to the throne of MMORPGs. To this day, it's almost impossible to find a fan of the genre that hasn't heard about this saga before.

And it brings us to Final Fantasy XIV, also known as FFXIV, the fourteenth installment of the never-ending franchise that many players were expecting for many years. Needles to say, there were a lot of problems when this game was first released. We all remember the unfinished Final Fantasy XIV that Square Enix wanted to sell us back in 2010, luckily. They did profound self-criticism and were able to save FFXIV from the claws of eternal oblivion.

But still, there were some game limitations that for some new players weren't so important, but for others, it was crucial to improve the experience and to forgive Square Enix for their sins finally. It is why we can now dive underwater in Final Fantasy XIV! We know you are dying to know how to dive in FFXIV. Worry not - Sellers and Friends is here to instruct you with FFXIV how to dive guide. FFXIV has many secrets, but diving won't be one of them.

Put on your most suitable FFXIV swimsuit and let us join you in your extraordinary quest across the phenomenal continent of Hydaelyn. 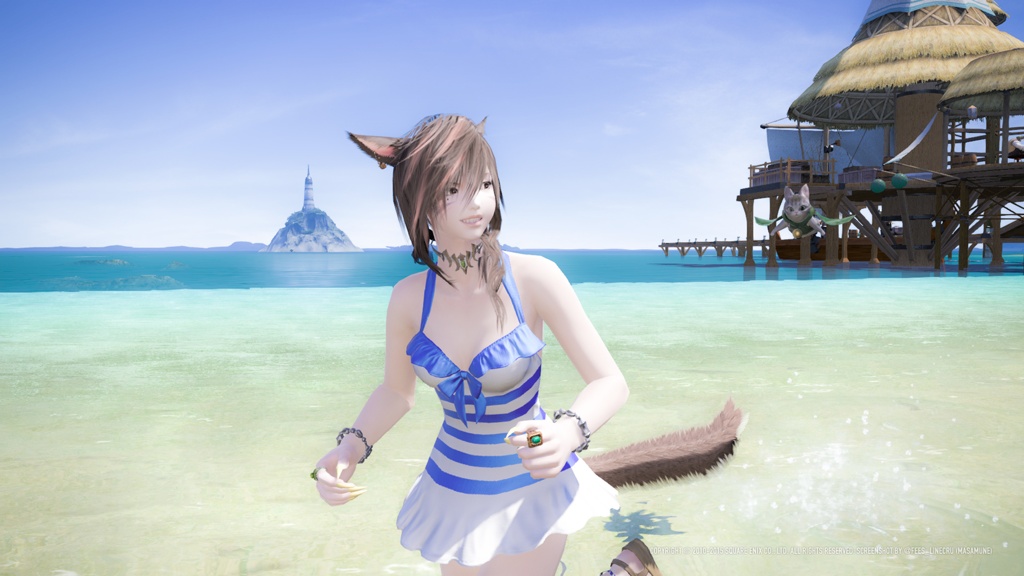 If you have followed the Final Fantasy saga, you know what happened to the original Final Fantasy XIV. To put it in a few words, it was a catastrophic failure. The game was a total mess, certain players decided to skip the franchise forever, and some new users didn't even bother to buy it due to the harsh critics and poor reviews. It is why the creators came out with a brilliant idea to save the saga: Final Fantasy XIV: A Realm Reborn.

It was a total reboot of the original Final Fantasy XIV game, and we can categorically say that it saved the saga for utter failure. The option to dive and swim wasn't implemented in this game at first, but the expansions served as the strongest point of FF14. How to dive underwater is a question regularly asked by new and old players, but the real concern was how they were going to implement the swim underwater feature without damaging certain storyline plots.

Luckily, in Final Fantasy XIV: A Realm Reborn, they didn't mess up with the plot, and the result was a fun game worth playing. The swimming feature was implemented in further expansions, Stormblood, and Shadowbringers, so we can state that they allowed users to explore water areas without making a mess in the story, which is good.

When was the diving and swimming feature implemented?

When players first experienced Final Fantasy XIV: A Realm Reborn, they didn't have the ability to swim underwater unlocked yet. So, how did Square Enix figured out to implement this new feature? They first did it in the Stormblood expansion. Most of the players were able to see the water areas, but they didn't have the chance to step into them. Consequently, in order to provide a new feeling to them, the developers said: "Let them swim in the water!".

Stormblood was such a cool expansion where players needed to liberate the city-states of Doma and Ala Mhigo from the evil Garlean Empire. New dungeons, new raids, new levels were released, and some changes to the battle system and the jobs that players could pick. Also, as you may expect, the new areas featuring diving and swimming gameplay were now available for everyone. And thus, the swimming and diving feature was born. But it wasn't as easy to get it as you may think, and this is where things get interesting.

How do you dive in FFXIV?

As we said before, the creators needed to find a way to magically implement the swimming feature according to this game's mechanics. The solution came with the Stormblood expansion and stayed in the next expansion, Shadowbringers. If you want to know how to talk to fish and turtles, then the best course of action for you is to put in Final Fantasy XIV, log in and follow this path.

What buttons do I press to swim underwater in FFXIV?

First of all, it is good to remember that Stormblood was the last update that PS3 users received in the day, so the old generation is out of the table after the Stormblood expansion. Most gamers dive with their characters on PC, so if this is your case, the default combination is CTRL + Space. If this doesn't work, check if you changed something in the settings.

If you are playing on a Playstation or an Xbox One, go to one of the water areas, swim for a while, and dive deep underwater by pressing B on the Xbox and O on the PS4. It is as simple as that! Diving in these areas is what Stormblood was about. It may even be what Final Fantasy is all about: an unlimited sense of exploration and discovery. There are some water areas in where we can dive when we talk about FF14, but word plays aside, we already covered pretty much everything rewarding the underwater adventures that we can get into if we decide to go diving deep enough in Final Fantasy 14: Stormblood. The diving feature was necessary to complete the ultimate FF14 experience, and so we got it.

Of course, you can't please everyone, and Square Enix knows it. Some users believe that the diving underwater feature was heavily underutilized. Nonetheless, everybody can agree that the underwater landscapes are beautiful. Diving is a very relaxing experience, so we don't have anything bad to say about this. Find a beautiful beach, dive in a forget about your problems for a while, thanks to this relaxing experience.

How do you dive in FFXIV Stormblood?

For consoles, just press O or B, depending in you are playing on Xbox or PlayStation. For PC, just press CTRL + Space.

Can you dive in FFXIV Shadowbringers?

Yes, the swimming feature is also in this expansion. Enjoy it!

Where can I play Final Fantasy XIV?

You can experience this journey on PS4, Xbox One, and PC.