The Skill Tree is a place where you can improve your character and develop its skills. But Skill Tree isn't only the place where you get new skills. Of course, developing new skills is the main idea of this board, but for better understanding, I prefer to look at it a little bit from the other side. As maybe you already know, possible improvement of character in Albion Online is enormous, thousands of ways to develop your hero. Skill Tree is a place where you pick particular paths where you want your hero to progress. The whole board has been split into five zones, each one represents a different way and set of skills.

Structure of Destiny Board 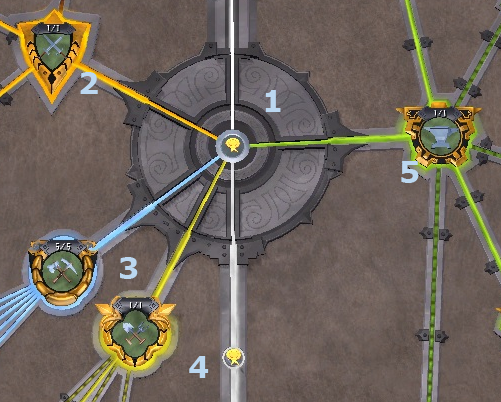 As I have said before, Destiny Board has been divided into a few major parts which I will describe below (Adventurer Path, Combat part, Farming part, Gathering part, Crafting part). This classification makes moving through Skill Tree much easier and quicker. Every zone consists of skills that are unique for its class. Here I have made a list of particular parts of the board and a brief description of them.

Adventurer Path is a little bit differs from the other elements attached to Destiny Board. First of all, there is no additional skill on the Adventurer Path, so there is no way of customizing development there. You progress by playing Albion Online in various ways that can differ from each other. There is no specific method of farming Fame for Adventurer Path, just casual playing also ensures players in progression. You may ask whats the purpose of getting fame, here are the benefits of a high level in Adventurer Path.

Higher stages at Adventurer Path allows us to:

Adventurer Path - white line in the middle of the Board.

Progression at Combat area, as the name says, will affect with improvement during fights later. To be more precious, improving our character in this way would let him wear better gear and let him use a higher tier of weapons. To progress in a specific path of equipment you are obliged to use this particular set while fighting or entering into combat. It would affect in advancing your level of Combat skills and give you additional benefits connected with them.

Combat path - Far left side of the Board.

Farming part is strictly connected with the matter of Private Island. Progressing at Farming Part is some kind of investment in the future. Farming can be a very good source of additional cash, so progressing it synchronously with other paths is very useful later in the game. Craft higher tier mounts better consumables because of development at Farming Part in Destiny Board.

Farming path - bottom left part of the Board.

Gathering - progression here gives you the ability to equip better tools and gather highly specialized resources. That skill can become very useful later because of created equipment or safely made items. High level of Gathering also gives you the opportunity to sell particular stuff on the Market.

Gathering part - bottom of the Board.

As the name says, Crafting part would affect in the progression in the crafting. It took a great amount of place in Destiny Board because of it is very vast. Many different specializations are maintained here. Good items may bring you a fortune while sold on the market. To get higher Tiers od Crafting you have to craft basic and very fundamental items.

Crafting part - right side of the Board.

Learning Points - LP gives us the opportunity to develop our character faster, and progress at the Destiny Board faster. People with Premium Status for at least 30 days would get 200 Learning Points. Premium status assures us taking 20 Learning Points every day on characters where this status is active. (Characters can be AFK, it doesn’t matter). So instead of spending a lot of time progressing the certain skill, you can skip this part a little bit in use of Learning Points.

After specializing in one specific thing game rewards you with bonuses from Mastery Points. The general thought is that you become more efficient in every chosen before role. It is worth to use them and find a particular way to develop pretty quickly. For example, because of Mastery Points, the cook can get some ingredients put into cooking. Combat player would be rewarded with additional attack points from certain weapons and for a farmer, farming may become more pleasurable and easier.

Zazziri • 20 April 2020 At least it is not as complicated as poe passive tree Reply
Jeffere Cold • 27 April 2020 helpful text thanks! Reply
Barnesrek • 1 May 2020 I love these advanced, multi-part development systems. Not that many combat skill though... Reply
Rhaelsan • 4 May 2020 It's always weird when farming in an MMORPG actually means having a farm and cultivating plants xD Reply
Bonedigger666 • 19 June 2020 So much effort put into these crafting and gathering skills, but the most fun part is just ganking these suckers in the red and black zones xD Reply