Escape from Tarkov Interchange map - get to Know the territory

Escape from Tarkov is one of the most popular video games nowadays for both hardcore gamers and the in-game currency sellers. All its features, that is to say, the real sense of danger, the fear of dying and losing loot, or the ambition to kill in order to get powerful armor make the Battlestate Games title so addictive, no matter which map you are playing on or if you are a PMC or a SCAV.

Interchange is a special location because it is full of places where you can kill, collect loose loot, and explore, becoming one of the most popular and complex maps inside the game.

In this shopping mall you will find some interesting locations like a burger spot, a parking lot, an emercom checkpoint, a power station, and some interesting extraction points you will definitely want to know, so don’t miss this Escape From Tarkov Interchange map guide and discover all the secrets and spawns that every respectful player needs to know about the shopping center in this game.

* The points of interest in the Interchange Map

* The first floor of the mall

* The second floor of the shopping mall

The points of interest in the Interchange Map 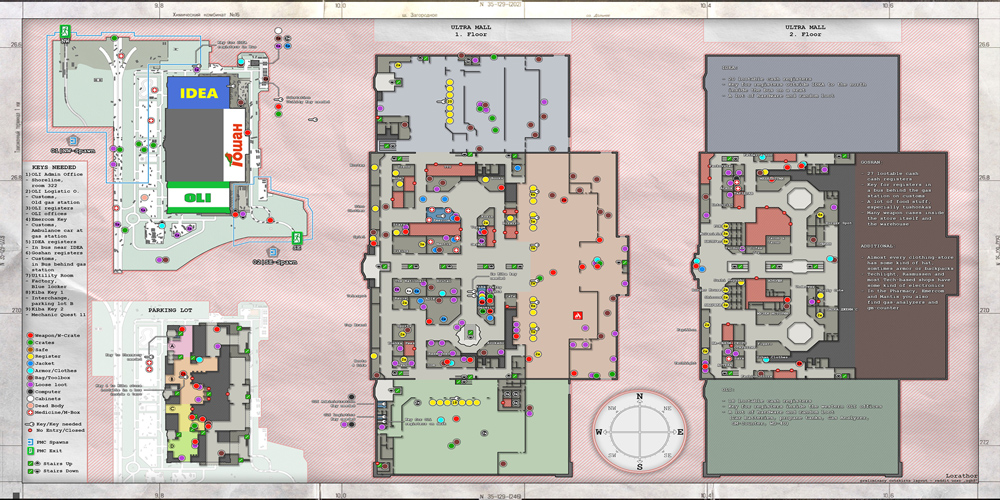 The first thing you need to know is that this map can have from 10 to 14 players and the duration of the game is 45 minutes on average. From minute 0 00 it will appear to you that you are being stalked and about to die. Next you have the most interesting places along this map.

It’s the bread and butter of the EFT Interchange map. It is where the most attractive loot lies, and most players meet to fight over it.

The Escape from Tarkov Interchange map is based on multiple areas and levels. The main parts are the garage, the first floor of the mall, and the second floor of the mall. It’s the shopping center. On these levels, we will find 3 main stores - IDEA, OLI, and Goshan - and some other interesting spots to loot and explore like the outside area or the go-kart track.

The green color store is Oli, it is the closest one to the entrance. Be careful cause there is a Scav spawn near there. The store in the red color of the map is Goshan, it’s exactly in the middle and it’s the longer one. You don’t need to leave it and then look for the exit in order to escape, you will find four different entrances to the store that will lead you to the mall halls. There you just have to walk straight and you will find 4 ways out to exit the mall and look for extraction points.

The blue one is IDEA, it only has two exits, the main one, or another on the same side where Goshan. There are some Scav spawn points there, but also good places to look, so take the chance to explore it on the map.

The Interchange was one of the first EfT maps to have a boss-class unit. As with the majority of such games, a boss is a high-risk, high-reward target. Taking him down is a tall task, but succeeding rewards players with some decent gear. The guy has some impressive equipment like a Maska 1Sch helmet and face shield, including a Blackhawk! Incredible weapons! Also a Commando Chest Harness, an RPK-16 5.45X39 light machine gun, and a 6B13 M assault armor. Face this boss and show us what you have!

The beauty of the map lies in the fact that there is no single “true” way of doing it. It’s not like “Spawn here, then past there, collect this, extract here. Don’t die in the process.” Only the last part with dying remains constant. Otherwise, it’s not the same every time. Unlike, for example, Shoreline, where you will spend 75% of your time around the Resort, and meet 75% of players there.

The first floor of the mall

The most interesting place on the map and the mall, in general, is the first floor. You will not only find the boss there but also a lot of places with loose loot like weapon boxes, ammo boxes, duffle bags, jackets, and grenades. It is important to know your way out since there are no extraction points there, so if you want to escape from Interchange pay attention to these details.

The second floor of the shopping mall

Now let's talk about the second floor. Probably you already know you have to use an escalator to get there, and probably you already have found several. Near the Jacob & Jacob, Coffee Joy, and Tarducks store there’s a Scav spawn (it is the only one that the developers added to this level). There are lots of small stores with med cases, loose electronics, one or another computer, jackets, textiles, valuables, and many register boxes with cash. Be on the lookout for any sign of a good loot. Explore them one by one, but first, if you go to the left side on top, really near to the burger spot and behind the urinal, you will find a key: the Object 11SR card which you can trade for a lot of ammo or escape at the extraction zone located in the Saferoom in the underground parking lot. To activate this key you will also need the power station switch to be on.

The garage will have lots of weapon boxes, wooden crates, grenades, and more, you may even find a Kila stash to loot. The most important and useful place will be the Saferoom as we said in the last paragraph because it is a great extraction point of the map if you don’t want to risk leaving the mall.

The safest place of this Escape from Tarkov map would be outside. In the open, you will notice that you are in the middle of a great city. Plus, you will have great views of the map so enemies don't escape your sight. When you are there, always search for places to loot. There are several with the plus of being close to almost every extraction point in the Interchange. The most attractive spot is near IDEA, you will not only find the power station, vital if you want to escape on the garage, but you will also find two keys near there: RB-MP21 and the one to KIBA Store Outlet. 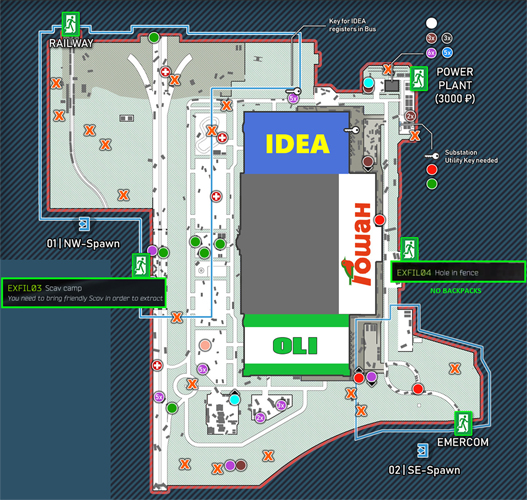 Now that you know how to move on the map and where to loot, it’s really important to know how to escape and leave the place without any risk.

Most of the Escape from Tarkov maps have the extracting zones on the outskirts. Well, Interchange is no exception to this, that’s the reason why entering and leaving the mall as fast as you can is one of the best tips and one of the golden rules you must apply. Go back and forth, that must be the maxim.

Escape from Tarkov interchange map has only six extraction zones, much less compared to other maps in the game. Five of them are located outside of the mall and they are:

You will find emercom in the south part of the map on the left, really near to the mall’s entrance that is closer to OLI.

The hole in the fence is also on the left but in the middle height of the map and. On the right side, but at the same height you will find Scav camp, and on the left side at the north, you can see Railway Exfil.

At the north of Escape from Tarkov Interchange map you will find the Power Station. A maximum of 4 players might escape through this and you’ll need to pay 3000 rubles in order to do that. Once you pay, you’ll need to wait and stay really close to the car that will take you out of the map, if you don’t it will leave you there, fighting through the Interchange land to find another place to escape. Battlestate Games guys are unrelenting in this regard.

The last extraction is the one we already mentioned on the Saferoom exit. Remember you need the energy to be on and the right key for it to work.

The keys on the Escape from Tarkov interchange map are:

One thing to note. Remember to look for them in jackets and pockets or bags from Scavs, many of them have access to pretty cool items that will help you kill your enemies if it’s needed.

This concludes the Interchange Map Guide that we share with you. We hope this info has been useful to your purposes. As you have seen, the tips mentioned here include all you need to know about the quest in this incredible map. Furthermore, Escape from Tarkov has lots of funny maps to play in, this is something Battlestate Games has worked really hard on since the game launch. This is not something new.

Here we are sharing our best tips to rule this difficult game, become the Tarkov king, and how to move better on Wood’s map. Click here and begin the new dare.

Are you ready to survive? If you are looking for another challenge and more information, please try Escape From Tarkov Customs Map, here is a guide so you can learn everything about this great scenario.