New World by Amazon Games has finally seen the light after so many years of waiting. Gamers are so excited that the servers are overcrowded. Over 1 million people are discovering the new territories of the Aeternum, gathering materials and gold, running faction missions, and fighting for the lands.

To be successful in this wild land, you will necessarily need to party up with a group of warriors and find fellows for your raids. These groups are called “factions.” As a part of a faction, you represent it in PvP against rival factions.

As a winner of a PvP, you will get in charge of the settlement and tax rates as well as receive buffs in the local area.

Factions offer a completely new system within the game. Otherwise, you can continue on your own path, but thanks to factions you can conquer new territories.

In this New World Factions Guide, you will discover several things related to this topic, including:

Why are New World Factions Important?

How to Switch Factions in New World?

Why Are New World Factions Important? 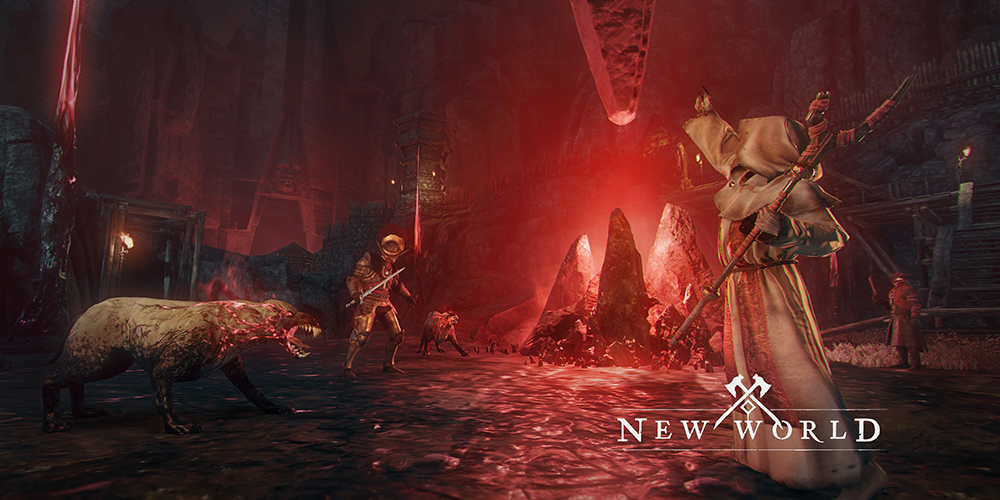 Think of all the MMOs you have already played: Final Fantasy XIV, World of Warcraft, RuneScape, or whatever you liked. You can see that each game has its system of jobs or guilds. Well, factions in New World work in a very similar way. Here are some relevant aspects:

How to Switch Factions in New World 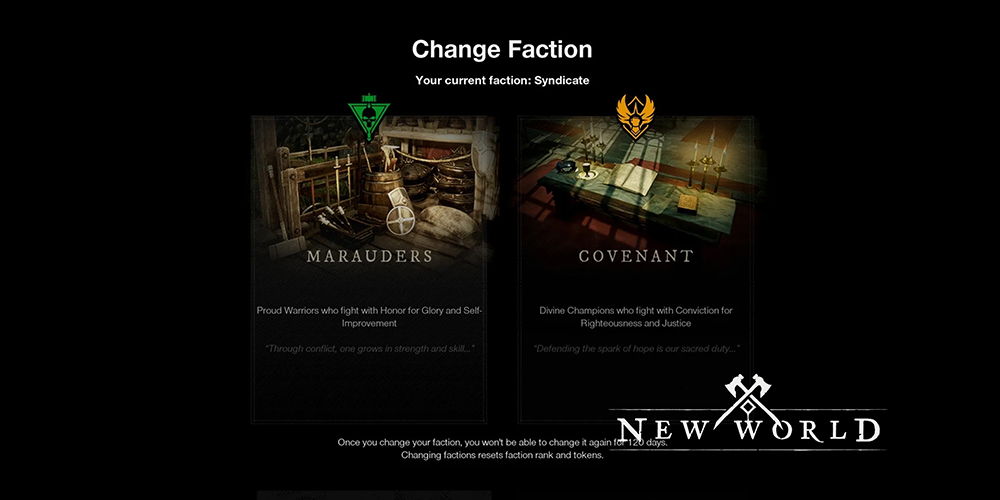 Remember that you can’t join another New World faction that controls and has undermined the most territory.

How to Join Factions in New World? 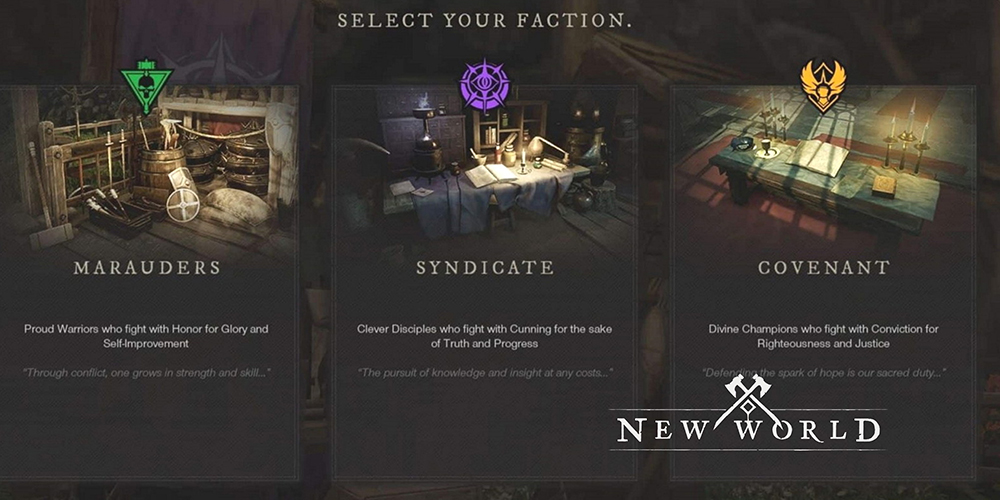 Joining a faction in New World is not a challenging task. You only need to accomplish a few requirements before you do it.

Anyway, keep in mind that New World has some rules to balance the power of the factions. For example, you can’t join a certain faction that rules over most parts of the territory. You always have to choose a smaller faction. Check the map to see which faction controls the regions.

Basically, at the moment we write this article, the most popular faction is the Syndicate, closely followed by the Marauders. We recommend you join the faction you know or where your friends are and play with them.

What Are the Factions in New World? 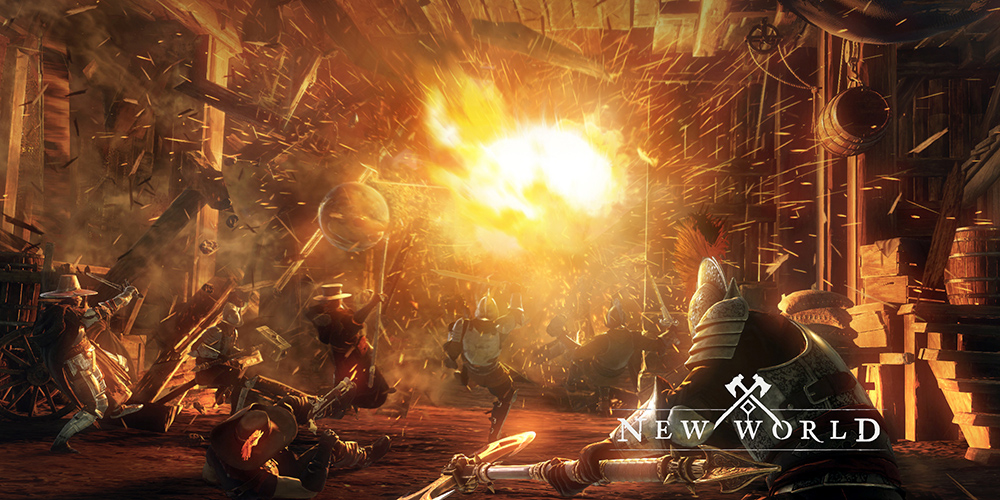 Essentially, when you finish the tutorial to New World, you will be thrown into the wilderness. You eventually have to make your way to the closest settlement. The main quest chain at this point will take you to encounter the three factions.

This is a secretive organization of boundless guile and intellect, a band of scholars and mystics. They are interested in the truth, the search for knowledge and justice, and taking the world to usher in a new age of enlightenment. They want to create enlightenment through forbidden knowledge. They have a purple plague doctor look.

Marauders are the stronger faction in terms of physical and martial attitudes. If you believe in the power of weapons and blood in combat, this is your faction. This ruthless military force bent on establishing free nations in the land where everybody can prosper and get a benefit by marketing, hunting, or crafting goods. They think that land belongs to those who fight for it. They are characterized by a green color scheme.

Covenant is the religious faction in New World, a fanatical order of clerics that contend for command of territories. They desire the flourish of the true holy nature of that world and the cleansing of heretics. Their members look like Catholic fanatics. This feature goes along the same line as the aspect of Marauder, who looks like Spanish conquerors. They have a distinctive orange color. 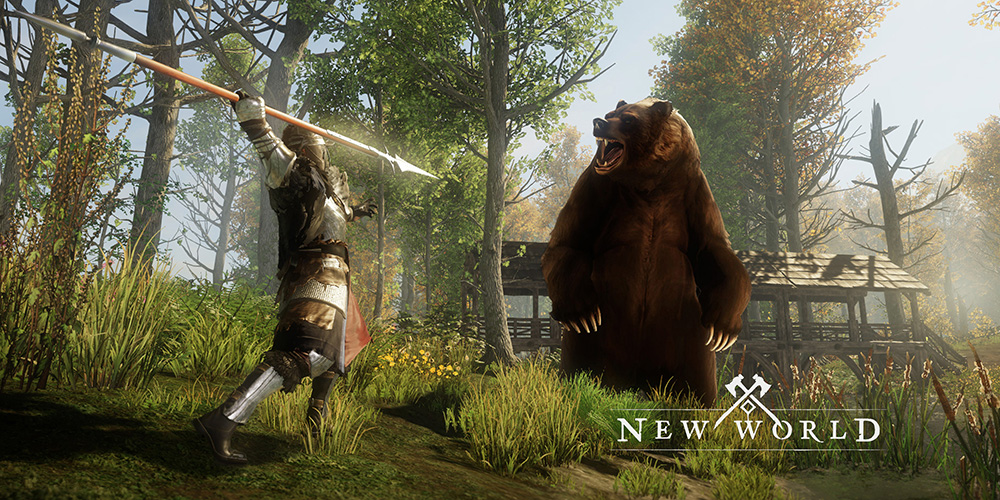 Although it may sound a little severe, your choice regarding the three New World factions is less important than you believe. There is not a big difference between them. Just choose the faction you prefer the lore and feel of.

Each faction has its characteristics, features, and benefits that make them unique.

The real differences are the following:

Just like every job or class in every MMO, factions in New World have several caps. These caps are related directly to your character level.

When you reach one of the faction’s caps, you will have to complete a special quest that will allow you to advance to the next rank.

To reach the max rank in your faction, first, you need to get to 49,000 faction rep. Then you have to complete a special quest for such purposes. 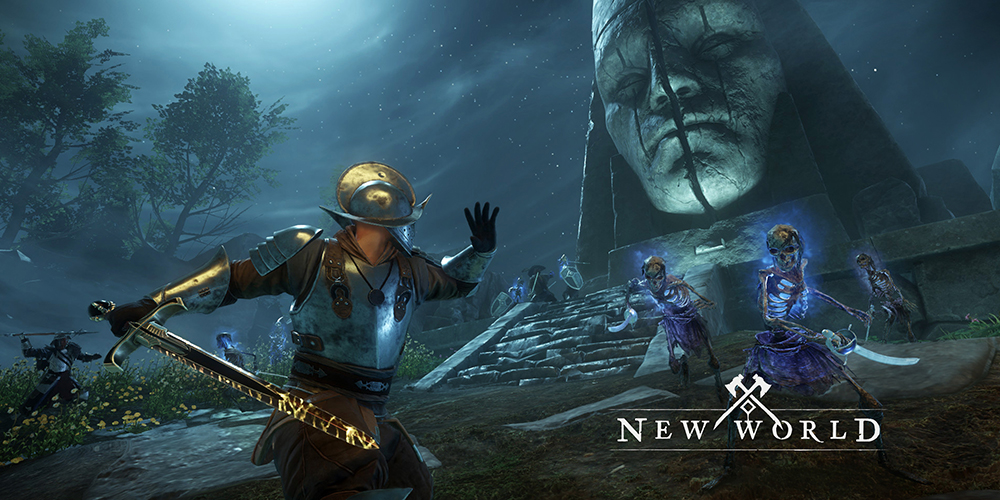 As we mentioned in the section “How to join factions in New World,” to join a faction you have to complete the main story quest “Choose your Allegiance.” Then, as soon as you choose your faction, you will be assigned the “Faction Initiation Story Quest.” The nature of this quest depends on the faction you chose and where you are located. Let’s take a look at the alternatives that are at your disposal.

Other quests that give you Covenant faction reputation are the following:

Other quests you will be able to start when you reach the rank of Soldier (Tier 1) are the following ones:

The quests you need to complete to progress to the highest rank of Syndicate are the next ones:

New World by Amazon Game Studios is the latest great MMO released. The audience has been waiting for this game for several years. Just a few times we’ve seen so much fuss for a game, and in the case of New World, it is totally deserved.

Factions in New World is one of the aspects that distinguish it from other games of this genre. Here you don’t find classes, jobs, or reincarnated ideals in the form of warriors and clerics.

Join the adventure, participate in raids, defeat enemies, save your friends, look to conquer your region, fight for freedom, and explore popular landscapes on the island. Choose one of the three groups, no matter which one, or the same faction as your allies and start to complete faction missions to reach new ranks.  Soon you will be the regent of the new continent. 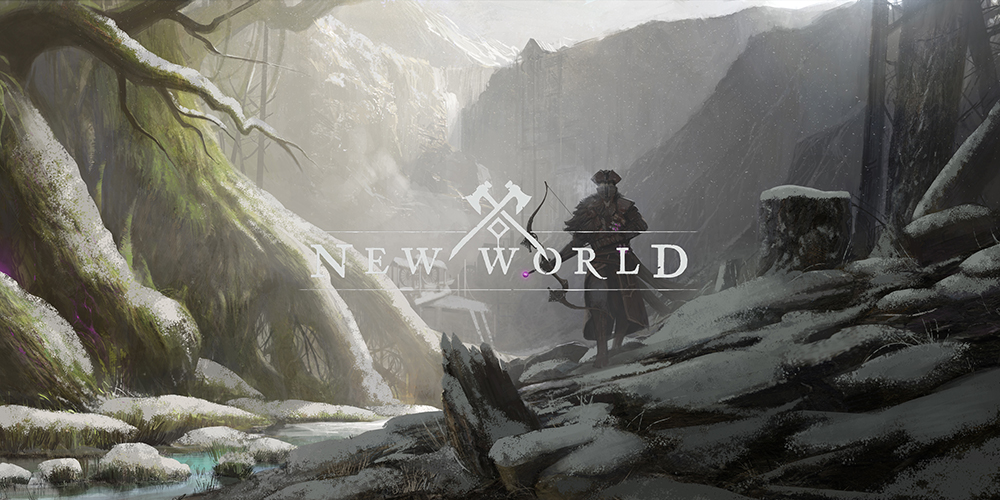 But if you’re already playing NW and you’re in the middle of the struggle with the gameplay, and you need some resources to improve your chances, you can purchase some money at Sellers and Friends. On our site, we have the best New World Gold offers on the web.

Similarly, if you have some questions about transactions, tax rates, any server we have, or whatever, feel free to contact through the live chat customer support or leave a message in the box below. We'll be happy to answer you. We always are in the vanguard of offering content related to this game, news, and many other gaming future brands.

How are the three factions in New World?

In New World, there are three opposing factions: Covenant, Syndicate, and Marauders. You can access one when you reach level 10. Then, when you have joined your team, you can switch to another after waiting 120 days.

How to join a faction in New World?

All trademarks are property of the respective owners and trusted partners. All rights reserved. Copyright 2021.

No part of this site or its content may be reproduced without the permission of the copyright holder.

How to Farm Gold in New World - [6 useful tips]