Lineage 2 Elves are being born from water. Naturally agile and attuned to forces of nature, they worship Eva, Goddess of Water. Elven mystics are masters of beneficial magic, archery and… singing. Elves used to be one of the most fun races to play, sadly, ever since Lineage 2 Goddess of Destruction, Elves are at a huge disadvantage when compared to Dark Elves. Let's get into Lineage 2 Elf!

When we are talking about Lineage 2 Classic, we need to talk about Elf classes.

Since we have discussed Summoners in the previous article, we will now discuss how elf mages perform when compared to its counterparts. 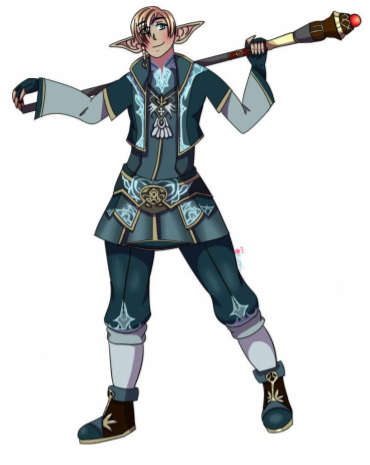 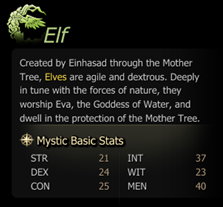 Those will be your starting stats, basically, you have a lower INT that affects only your M. atk at this moment. So your base M. Atk will be lower to that compared of Dark Elves, and human mystics. Elves have higher WIT than their counterparts which means faster casting speed, higher, magic accuracy, m evasion, m defense rate, and magic critical rate. It looks like a big difference with the higher WIT, but 7 points less INT translates to approx to 15% lower M. Atk. Elves have one more point to CON so its close to irrelevant.  They have three points more to MEN which gives them more M.def, and less skill cancel rate due to damage from foes.

So besides the obvious difference between the classes that each race can pick. If you choose an elf it will cast faster, have less m attack, more m def, and less skill cancel rate chance.

What is the trick to get the most of this stats? You should spam cast in every single PvP or PvE situation, keep in mind your mana tough, as it would be the only limiting factor. If you are hitting once every time, you are not getting the most of the class, as a spellhowler or a sorcerer would do more damage in a short period of time than an elf does. This applies to both summoners and mages. When we play a healer, an Elven Elder, we find that this class shares a lot with the Shilen Elder, the Dark Elf counterpart.

You will find that it's likely that most of the rechargers are Shilen Elder, as they have Empower, a super useful mage buff. But in the late game, EE are way more flexible, their buffs make their party consume less MP (Clarity). On the other hand, empower can be replaced by a WC on late game. So the road might be hard at the beginning might be complicated, but in the end, an EE will be needed. 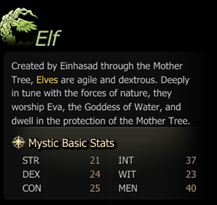 With warrior classes, there is a little more to discuss, let's begin with the in my opinion easier decision: Elven Knight

For me, the decision to play an Elven Knight is purely to become a Sword Singer ( Sword Muse). Their buffs are unequivocally necessary. On the other hand, the Temple Knight a.k.a Elven Knight (Eva’s Templar) comes off as not-so-good of a tank. It can fully perform the role, it has the skills for it, but is it the best according to its stats? To me, the answer is simply no.

The stats you are looking for a tank is high CON, elves have 25 CON, two points less than a human fighter, and 1 more than a dark elf warrior. If you want to go for CON you should go ahead with a human. Remember tanks can also bruise and do damage on early levels, that's why elf seems a not so rational pick, as they have four and five points less of STR than Humans and Dark Elves. Even if dark elves, have lower CON their high STR and offensive skills kind of makeup for their lack of HP.

Dagger: Daggers are in my opinion the most equally balanced class in Lineage II classic. The stats of each race translates into:

Treasure Hunter: highest hp, its middle in damage, but has slower run speed, but has the lowest evasion.

The actual decision depends on the way you like to play your char, and what do you like. So this is one of the classes that if you can't decide what to play, you can go by the looks. As the way of playing will determine how successful one is.

Archers: You will find that most of the archers in the field, are dark elves, followed by humans, and last the elves. The main difference of the archers is how you play them, and how basically a party moves. For example, in late game a Phantom Ranger, with a decent set of STR Dyes could easily one shot a foe with a critical hit. It's contrasting to the Silver Ranger because of the racial stats and base stats of an elf it would almost be not possible to do this.

Another live example: A lot of phantom rangers do this, get a full set of STR dyes decreasing CON and DEX, and on the PvP field use skills like, Fatal Counter, Lethal Shot, Double Shot and Recede, if the gear is decent the skill crits are most likely to be a kill, if its not, the damage would still be immense. This is reinforced further by the skill, Dead Eye making the Phantom Ranger the most pursued class.

On the other hand, you can try to do this with a Silver Ranger. Add STR Dyes, take out CON or DEX, cause you have a little more points to spare. BUT, you don't have Dead Eye, you have Rapid Fire that shortens your range, if you get too close without CON you will be stunned and most likely die, you may land a hit but it won't be even close to an equally geared phantom ranger damage. So if you go for a Silver Ranger, don't diminish its strong side that its DEX, fight in close quarters, don't pop rapid fire when kiting, and don't decrease all of the DEX with STR dyes. Because you won't reach a phantom ranger or human STR, and basically you will have no DEX now.  I would suggest adding STR by decreasing CON and DEX and adding WIT by decreasing INT. Make the most of it your own way, there are no OP classes, there are people who know how to play their characters and people who don't.

I'll explain here, why you shouldn't pick an elf after changes added with Goddess of Destruction content. This is because you have access to chaos essence you can basically pick the most desiring stats according to a race, use chaos essence and get the class you want, within the same branch. Why? Keep Reading

Mages and Summoners: I'll give examples cause that's the reality of it all, no need to do big discussions. In Orfen, you can create a Dark Elf Mystic, it will have a lot more of INT, and therefore a lot more of M. Atck. What people do is, create a Dark Elf Mystic, if you want a Feoh Wizard, it would become Dark Elf Storm Screamer normally, then you use Chaos Essence, and change, let's say, to Archmage you have a Dark Elf Archmage, that would have more M.atck than a human Archmage.

Basically, everyone does this class transfer trick: for a tank, you pick a Human, for Feoh a Dark Elf or Kamael for the 3rd class passive (which you can keep), an Orc for a Tyrr. And now people play the subclass, so dwarf CON as a race would do a dual class of tank really good. Sadly, it has a big impact forcing people at lvls 103-104 to reroll because of this.

We don't have that much of INT so Elf race is not so good for Feoh or Elemental Summoner. Not enough CON for a tank or Iss not enough STR for Yull etc. The thing here is that you can keep Rapid Fire, in the CURRENT CHRONICLE (Orfen) so you can spam skills faster, keep in mind that this will be removed and fixed for all of 3rd class skills. Arguably you can make Elf work with DEX since DEX is a very important stat for an archer in this chronicle, but with top gear, even dark elves can hit the hard cap.

Outer Box • 6 May 2020 I play Elf Feoh and it works for me Reply
Jking09 • 9 May 2020 if not for the elves i would never play l2 there is something about them and their connection to LOTR Reply
Peterson123 • 10 May 2020 Spellsinger has always been my favorite nuker. Just splash them with water, until they die xD Reply
Taylodo • 12 May 2020 Eva's Templar is the best tank for all the group content. It may suck in 1v1s, but man, this class can take so many hits. No other tank gets even close. Reply
Blagden28 • 23 July 2020 Other archers take like half an hour to shoot a single arrow, while Silver Ranger be like "arrow printer goes brrr" xD Reply

Lineage 2 Classic leveling guide - reach the endgame in no time!